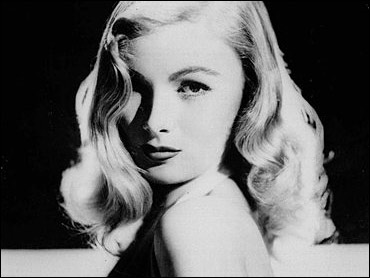 With her peek-a-boo blond hairdo and sultry looks, Veronica Lake was the "it-girl" of the 1940s silver screen. When she died penniless three decades later, her ashes sat anonymously in a funeral home for nearly three years before they were scattered off the Florida coast. Or were they?

Far from the Hollywood hills and many miles north of Miami, Lake's reputed remains have resurfaced in a Catskills antique store. The quirky little shop plans a homage to the late star on Saturday, with a look-alike contest, "Peek-A-Boo" cookies — and a spoonful of the actress' purported ashes taking center stage.

While questions about the ashes' authenticity hang over the event like Lake's signature hairstyle, the boutique's owner is convinced they are the real thing.

Lake was once one of Hollywood's brightest lights, a contemporary of Oscar winners Ingrid Bergman and Joan Crawford, a co-star with Alan Ladd in the film noirs "This Gun for Hire" and "The Glass Key," and with Joel McCrea in Preston Sturges' "Sullivan's Travels."

Her hairstyle, with long locks cascading over her right eye, was so popular that U.S. officials asked her to change it during World War II, fearing the 'do might cause workplace accidents among women on assembly lines.

But when the actress died in her early 50s on July 7, 1973, she was an entertainment footnote. She was working as a New York cocktail waitress, drinking heavily and married to her fourth husband, a commercial fisherman known as "Captain Bob."

Her sparsely attended Manhattan memorial service was paid for by a friend, veteran ghostwriter Donald Bain, who penned Lake's autobiography. Not even her ashes made the event; they were stored at a Burlington, Vt., funeral home in a squabble over money, as best Bain can remember.

The remains remained there until March 1976, when two friends volunteered to bring Lake's ashes to Florida. Bain sent the funeral home $200 to cover the back storage fees, and the ashes were shipped to the Park Avenue residence of Lake confidante William Roos.

Roos and pal Dick Toman took the ashes south for their ceremonial deposit in the water off Miami, just as Lake had once requested.

Mission accomplished. Or so Bain thought.

The years passed, Toman died, Roos fell out of touch with Bain — and then, 28 years later, Lake's ashes reappeared, along with an odd story of ownership.

According to Lake's current keeper, Larry Brill, off-Broadway producer Ben Bagley saw the urn with Lake's ashes while visiting Roos and became enamored of the attractive container. Roos, for reasons unexplained, later sent along the ashes to Bagley without the urn, said Brill.

A disappointed Bagley promptly poured the remains into a manila envelope and mailed them to Brill in about 1979. The amount was so small that it was clearly not all of her remains, suggesting that Roos might have saved some of the ashes as a keepsake.

"I have no reason not to believe the ashes are Veronica Lake," said Brill, 65, a graphic designer and Lake fan. "Benny's not going to dump some stranger's ashes in an envelope."

Bagley died in 1998, and neither Brill nor Bain knows what became of Roos. That leaves Bain as the last skeptical voice.

"How do you know these aren't the ashes of a dog from the vet?" wondered the author of more than 80 books, including the "Murder She Wrote" mystery series under the Jessica Fletcher pseudonym and the amorous adventures of two swinging stewardesses in "Coffee, Tea or Me?"

Brill, who spends his weekends in the Catskills, brought the ashes to Levine's store this summer. They quickly found a place among the shop's garden gnomes, vintage clothing and paint-by-number art, and inspired the October tribute.

Brill plans to take the ashes back to Manhattan afterward, and said he was considering offers for the ashes from potential buyers.