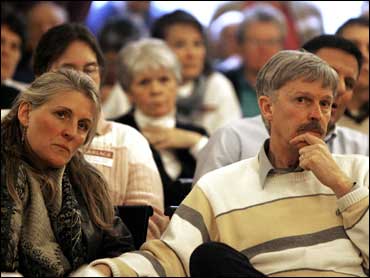 "It provides ... gay and lesbian couples the same rights that I have as a married heterosexual," said Sen. John Campbell, vice chairman of the Senate Judiciary Committee and chief sponsor of the bill.

The committee's vote ended an intense week highlighted by a public hearing Wednesday night in which more than 500 people swarmed the Statehouse to speak for and against allowing same-sex marriages.

If approved, Vermont would join Massachusetts and Connecticut as the only U.S. states that allow gays and lesbians to marry.

The measure would replace Vermont's first-in-the-nation civil unions law with one that allows marriage of same-sex partners beginning Sept. 1. Civil unions, which confer some rights similar to marriage, would still be recognized but no longer granted after Sept. 1.

Both Houses, under Democratic control, are expected to pass the measure. The Senate is taking the lead and is expected to debate the bill next week.

Gov. Jim Douglas, a Republican, has said he opposes the bill, but has declined to say whether he will veto it if it reaches his desk.

"I've made my position quite clear that I believe marriage is and ought to remain the union of a man and a woman, that our civil unions law affords equality of opportunities and rights under state law and that that should suffice," the governor said on the eve of the Senate committee vote.

The bill would exempt members of the clergy from performing same-sex marriages if their faiths forbid such unions, and would bar lawsuits prompted by such refusals.

The exemption would not extend to justices of the peace and other public officials who perform civil marriages but who might object to officiating at same-sex unions. Those people are agents of the government and are barred by law from discriminating based on sexual orientation, Campbell said.

Vermont in 2000 became the first state in the country to pass a civil unions law, which grants many of the rights and responsibilities of marriage to same-sex couples. But gay marriage advocates have argued since then that the law does not go far enough. California, New Jersey and New Hampshire also permit civil unions.

Friday's committee vote followed the panel's rejection of an amendment proposed by Sen. Kevin Mullin, R-Rutland, that would have put the gay marriage question to a statewide referendum next March. After the amendment was defeated, Mullin joined his colleagues in voting 5-0 for the bill.

"The committee was attentive throughout the week. They heard a wide range of witnesses on a wide range of issues, and I think, ultimately, they did the right thing," said Beth Robinson, a Middlebury lawyer and chairwoman of the Freedom to Marry Task Force.

Stephen Cable, president of the group Vermont Renewal, an organization that opposes same-sex marriage, said the civil unions law and the possible passage of gay marriage bill shows the state "no longer seeks to promote that each child have a mother and a father. And I think that's shameful and very sad."