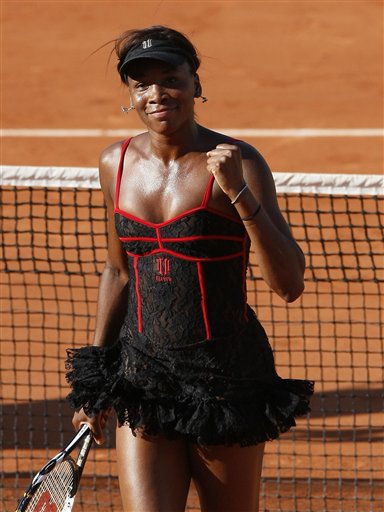 NEW YORK (CBS/AP) U.S. tennis star Venus Williams set tongues wagging in France Sunday when she played in the French Open in Paris in a black corset-style outfit usually found on the dance floor instead of the tennis courts.

Williams, 29, drew whistles when she appeared on the court in Paris in a lacy, red-trimmed, black outfit with a corset-like top and a tutu skirt that gave the illusion of being see-through. Can-Can, anyone?

The design -trained , top -seeded player player , who has her own fashion called EleVen , told the press it was all "about illusion."

And yes, Williams , who is currently ranked No. 2 in the world, did win the first-round match against to Switzerland's Patty Schnyder, 6-3, 6-3.