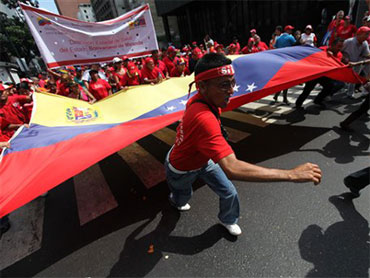 Tens of thousands of Venezuelans opposed to President Hugo Chavez took to the streets Saturday, blaming him for rolling blackouts, water rationing, widespread crime and other problems they say are making daily life increasingly difficult.

Chavez backers flooded the capital's avenues with an equally impressive demonstration as the socialist leader faces mounting criticism and an emboldened opposition ahead of upcoming congressional elections.

Waving Venezuelan flags, protesters accused Chavez of dragging the politically divided South American country into a severe crisis as he accelerates his drive to transform it into a socialist state.

"Chavez is leading the country to ruin," said 79-year-old Olga Damjanovich at the opposition protest. "He's controlled all the country's institutions for more than a decade, so how could it be possible that he's not responsible for the problems weighing down on us?"

Many wore T-shirts that read: "3 Strikes: Blackouts, Water Rationing and Crime. Chavez, You've Struck Out!" A pickup truck weaving its way through the crowd carried a papier-mache model of a candle alongside a sign reading: "Chavista Electricity Plant."

Chavez backers rebutted the criticism, accusing opponents of exaggerating the country's calamities. While several conceded that problems seem to be piling up, they said that Chavez would resolve them.

"Things aren't all as we would like them to be, but we know that El Comandante is doing what he can to help us, the poor," said Yorbert Rodriguez, a 39-year-old bricklayer.

Over 5,000 police and National Guard troops were deployed along march routes to prevent clashes between rivals. There were no reports of arrests or violence, which has marred numerous political rallies in the past.

Political rivals organized Saturday's demonstrations to coincide with the 52nd anniversary of an uprising that toppled Venezuela's last dictator. As they commemorated the 1958 overthrow of Gen. Marcos Perez Jimenez, Chavistas argued that democracy is growing stronger, while government foes fear their liberties are slipping away.

But it remains unclear if the opposition strategy will be successful against Chavez, a tireless campaigner who has overcome bigger obstacles during his 11-year presidency. The former paratroop commander emerged unscathed from a botched 2002 coup and devastating two-month strike the following year.

Chavez has easily defeated opponents in most elections and remains popular - especially among the country's poor majority. He has repeatedly vowed to give his adversaries "a beating" on Sept. 26 to maintain a commanding majority in the National Assembly.