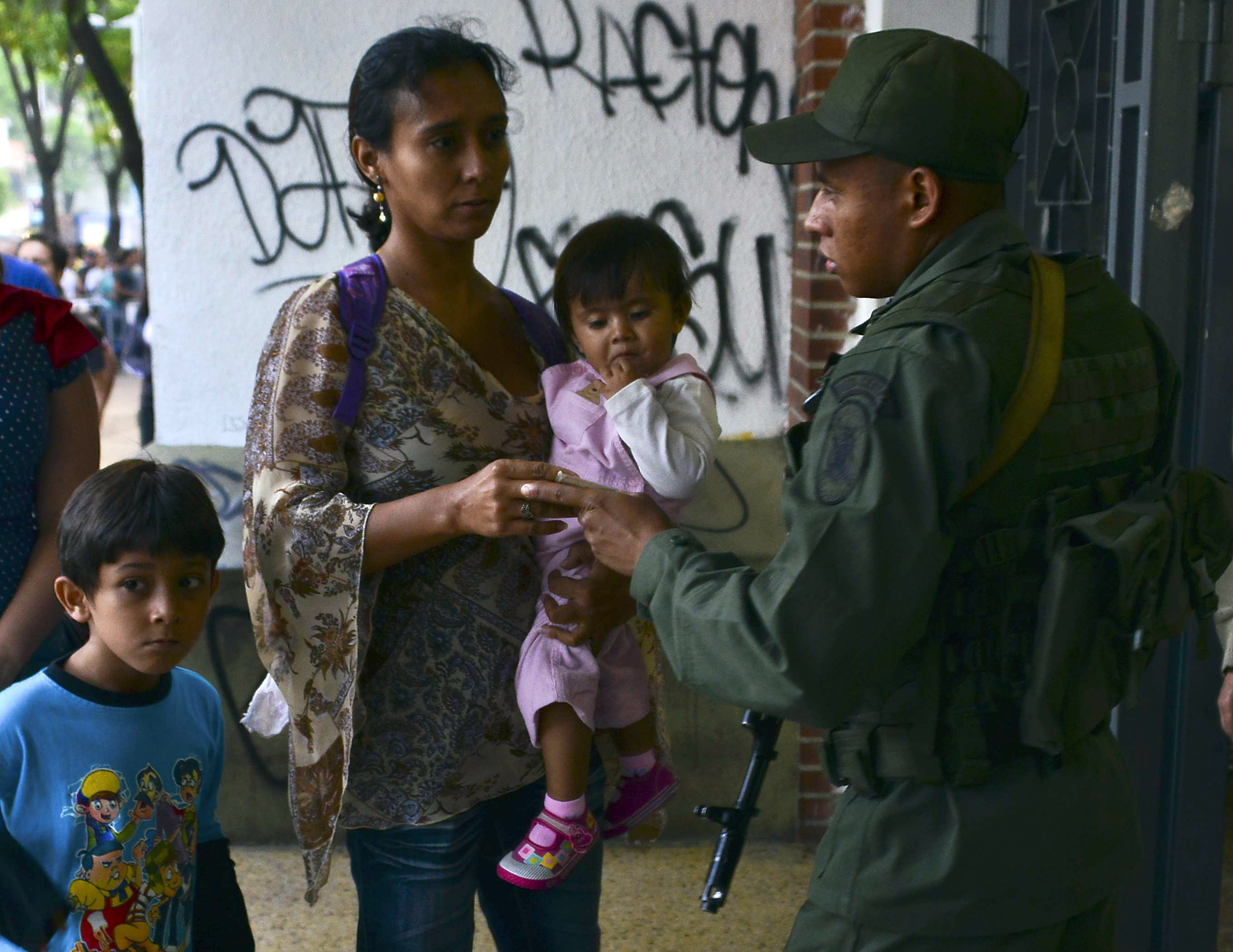 CARACAS, Venezuela Voters chose Sunday between the hand-picked successor who campaigned to carry on Hugo Chavez's self-styled socialist revolution and an emboldened second-time challenger who warned that the late president's regime has Venezuela on the road to ruin.

Nicolas Maduro, the longtime foreign minister to Chavez, pinned his hopes on the immense loyalty for his boss among millions of poor beneficiaries of government largesse and the powerful state apparatus that Chavez skillfully consolidated.

Maduro's campaign was mostly a near-religious homage to the man he called "the redeemer of the Americas," who succumbed to cancer March 5. He blamed Venezuela's myriad woes on vague plots by alleged saboteurs that the government never identified.

Challenger Henrique Capriles' main campaign weapon was to simply emphasize "the incompetence of the state," as he put it to reporters Saturday night.

Maduro, 50, was favored to win, and two hours after polls closed his campaign manager, Jorge Rodriguez, used a news conference to summon supporters to the presidential palace from which Maduro has governed since being sworn in as acting president upon Chavez's death.

Capriles urged supporters in a Tweet not to be "desperate and defeated," saying results were still coming in from across Venezuela.

Maduro's big lead in opinion polls was cut in half over the past two weeks in a country struggling with the legacy of Chavez's management of the world's largest oil reserves.

Millions of Venezuelans were lifted out of poverty under Chavez, but many also believe his government not only squandered, but plundered, much of the $1 trillion in oil revenues during his tenure.

"We can't continue to believe in messiahs," said Jose Romero, a 48-year-old industrial engineer who voted for Capriles in the central city of Valencia. "This country has learned a lot and today we know that one person can't fix everything."

Voting lines seemed considerably lighter than in the October election that Chavez won, when more than 80 percent of the electorate turned out, although government officials said it was due to the improved efficiency of the system.

After polls closed there were moments of tension at some voting centers.

At Andres Bello high school in central Caracas a band of about 100 Chavistas on motorcycles, many with faces covered with bandanas, harassed opposition activists who wanted to witness the vote count to ensure there was no fraud.

Some of the Chavistas tried to steal phones and cameras from people recording video of the event. The digital audio recorder of an Associated Press reporter was grabbed out of her hand.

Motorcycle-riding Chavistas have on several occasions during the campaign beaten Capriles supporters in the capital, though none apparently seriously enough to require hospitalization.

In the Chavista stronghold of Petare outside Caracas, the Maduro vote was strong. Maria Velasquez, 48, who works in a government soup kitchen that feeds 200 people, said she was voting for Chavez's man "because that is what my comandante ordered."

Reynaldo Ramos, a 60-year-old construction worker, said he "voted for Chavez" before correcting himself and saying he chose Maduro. But he could not seem to get his beloved leader out of his mind.

"We must always vote for Chavez because he always does what's best for the people and we're going to continue on this path," Ramos said. He said the government had helped him get work on the subway system and helps pay his grandchildren's school costs.

The governing United Socialist Party of Venezuela deployed a well-worn get-out-the-vote machine spearheaded by loyal state employees. It also enjoyed the backing of state media as part of its near-monopoly on institutional power.

Capriles' camp said Chavista loyalists in the judiciary put them at glaring disadvantage by slapping the campaign and broadcast media with fines and prosecutions that they called unwarranted.

Capriles is a 40-year-old state governor who lost to Chavez in October's presidential election by a nearly 11-point margin, the best showing ever by a challenger to the longtime president.

"Capriles ran a remarkable campaign that shows he has creativity, tenacity and disposition to play political hardball," said David Smilde, an analyst with the Washington Office on Latin America think tank.

At his campaign rallies, Capriles would read out a list of unfinished road, bridge and rail projects. Then he asked people what goods were scarce on store shelves.

Capriles showed Maduro none of the respect he earlier accorded Chavez. Maduro hit back hard, at one point calling Capriles' backers "heirs of Hitler." It was an odd accusation considering that Capriles is the grandson of Holocaust survivors from Poland.

The opposition contended Chavez looted the treasury last year to buy his re-election with government handouts. It also complained about the steady flow of cut-rate oil to Cuba, which Capriles said would end if he won.

Venezuela's $30 billion fiscal deficit is equal to about 10 percent of the country's gross domestic product.

Maduro, a former union activist and bus driver with close ties to Cuba's leaders, constantly alleged that Capriles was conspiring with U.S. putschists to destabilize Venezuela and even suggested Washington had infected Chavez with the cancer that killed him.

He focused his campaign message on his mentor: "I am Chavez. We are all Chavez." And he promised to expand anti-poverty programs.

The victor of Sunday's balloting will face no end of hard choices.

Many factories operate at half capacity because strict currency controls make it hard for them to pay for imported parts and materials. Business leaders say some companies verge on bankruptcy because they cannot extend lines of credit with foreign suppliers.

Chavez imposed currency controls a decade ago trying to stem capital flight as his government expropriated large land parcels and dozens of businesses. Now, dollars sell on the black market at three times the official exchange rate and Maduro has had to devalue Venezuela's currency, the bolivar, twice this year.

Meanwhile, consumers grumble that stores are short of milk, butter, corn flour and other staples. The government blames hoarding, while the opposition points at the price controls imposed by Chavez in an attempt to bring down double-digit inflation.

A 37-year-old government employee leaving a polling station in central Caracas with her 4-month-old son and her sister said she was fed up with what she described as political intimidation at her office and was voting for Capriles.

"We have to keep quiet at work or else they fire you or make your life impossible," said the woman, who asked that she only be identified by her first name, Laurena.

She said she had been told to attend pro-government marches. "You go for a little so they see your face and then you leave. It's not fair that you have to stop doing your job to go to a march. "