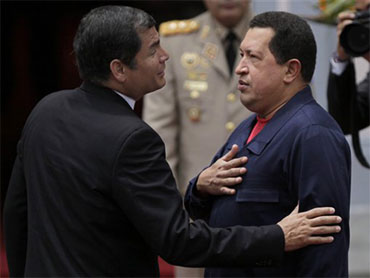 Venezuela plans to extradite a Salvadoran man wanted by Cuba as a suspect in a series of bombings, Venezuelan President Hugo Chavez announced Tuesday.

Chavez didn't say exactly when Francisco Chavez Abarca would be sent to Cuba, Venezuela's closest foreign ally. The socialist leader made the announcement during a meeting with Ecuador's president, Rafael Correa.

Cuba believes Chavez Abarca placed an explosive that damaged a hotel disco on April 2, 1997, and another bomb later that month that failed to explode on the 15th floor of the same hotel. Cuban officials also suspect him in a 1997 bombing of a Cuban government office.

Chavez noted that Venezuelan authorities have been interrogating Chavez Abarca since his arrest last week. "We are looking for possible connections with some sectors" of Venezuela's opposition, the president said.

Justice Minister Tareck El Aissami claims the suspect planned to cause violence in Venezuela ahead of the South American nation's legislative elections in September.

"This terrorist has said that he came to commit a series of attacks to provoke upheaval leading up to election on September 26," El Aissami said over the weekend.

"He had made contact with fascist groups of the counterrevolution," the official added, referring to the opposition.

El Aissami did not provide any details.

Leaders of the opposition deny they plan to resort to violence to disrupt the elections or to boost their effort to unseat Chavez.

The suspect was detained by Venezuelan intelligence agents after he arrived last week at Simon Bolivar International Airport. He initially gave a false name, then later acknowledged his true identity, Chavez said after the arrest.

"Who was waiting for him at the airport? What did this citizen, wanted by Interpol, come to do?" Mendoza said.

El Salvador's president, Mauricio Funes, rejected her allegations during a news conference Tuesday, saying: "It's not true." But he also said authorities should look into her claims.

El Salvador's foreign minister, Hugo Martinez, announced Monday that officials would provide Venezuelan authorities with information on Chavez Abarca. He added that the Central American nation would grant the suspect "consular protection" if he asked for it.