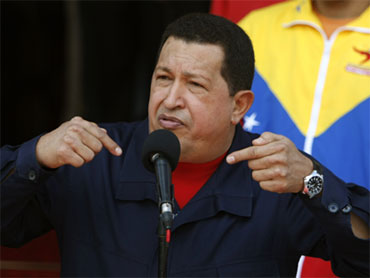 President Hugo Chavez severed Venezuela's diplomatic relations with Colombia on Thursday over claims he harbors guerrillas, and he warned that his neighbor's leader could attempt to provoke a war.

Chavez said he was forced to break off all relations because Colombian officials claim he has failed to act against leftist rebels who allegedly have taken shelter in Venezuelan territory.

He acted moments after Colombian Ambassador Luis Alfonso Hoyos presented a meeting of the Organization of American States in Washington with photos, videos, witness testimony and maps of what he said were rebel camps inside Venezuela and challenged Venezuelan officials to let independent observers visit them.

In Washington, Hoyos said that roughly 1,500 rebels are currency hiding out in Venezuela and he showed follow diplomats numerous aerial photographs of what he identified as rebel camps located within Venezuelan territory.

Hoyos said that Alvaro Uribe's government has repeatedly asked for Venezuela's cooperation to prevent guerrillas from slipping over the porous 1,400-mile border that separates the two countries.

"We have the right to demand that Venezuela doesn't hide those wanted by Colombia," Hoyos said, urging the OAS to investigate Colombia's claims.

He insisted that several rebel leaders are currently hiding out in Venezuela.

Chavez's envoy, Roy Chaderton, did not respond to the challenge to allow visits to the camp sites and said the photographs don't provide any solid evidence of a guerrilla presence in Venezuela.

Chavez suggested the photographs could be bogus, saying Uribe "is capable of anything."

The socialist leader has argued in the past that U.S. officials are using Colombia as part of a broader plan to portray him as a supporter of terrorist groups to provide justification for U.S. military intervention in Venezuela.

"Hopefully he'll understand that leftist and right-wing governments can live together," Chavez said of Santos.

Chavez insisted that Venezuela is doing everything possible to prevent members of the Revolutionary Armed Forces of Colombia and the smaller National Liberation Army from crossing into Venezuelan territory.

"We have a government that shelters and protects Colombian guerrillas," said Luis Carlos Solorzano of the Copei opposition party.

Solorzano said that rebels have taken shelter in the states of Zulia, Tachira, Barinas, Portuguesa, Cojedes, Aragua and Apure, leaving behind their camouflage fatigues and hiding out in sparsely populated rural areas. The military and other state security forces don't bother the guerrillas, he added.