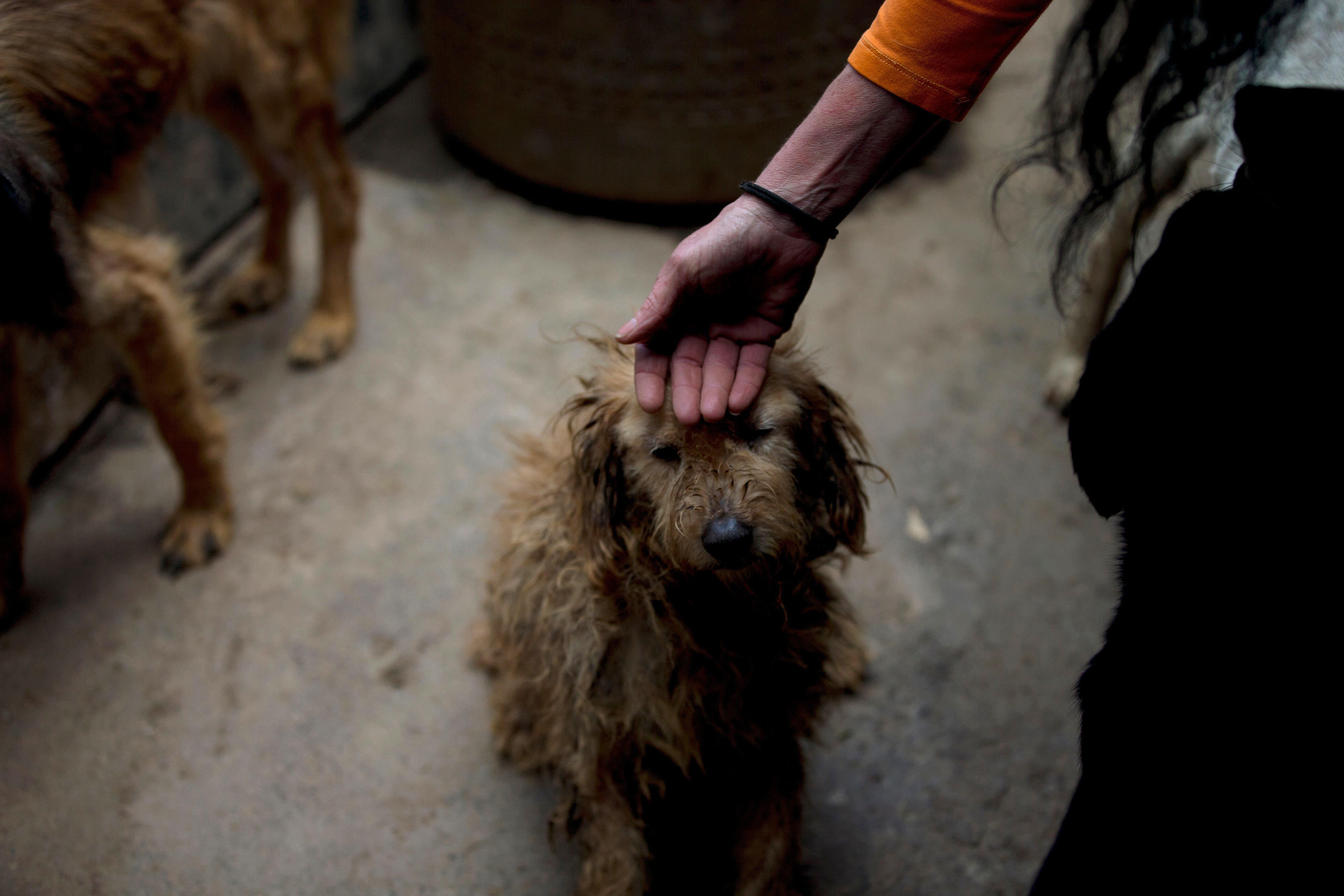 CARACAS, Venezuela -- Carlos Parra used to love waking up to see his pet albino boxer, Nina. Now, seeing her skeletal body on the floor next to his bed has become a daily reminder of the economic crisis engulfing Venezuela.

His other dog’s thick fur barely hides her ribcage as Parra struggles to feed his pets after losing his job at a shoe store.

“It’s terrible to sit and eat, see them watching me with hunger, and not be able to do anything,” said the 30-year-old.

As Venezuela’s economic crunch worsens, food shortages and rising poverty are forcing once middle-class Venezuelans to do the unthinkable: let their pets starve or abandon them in the streets.

No figures are available, but activists and veterinarians say they are seeing a growing number of dogs and cats abandoned at parks, shelters, and private clinics.

In Caracas it has become common to see purebred dogs rummaging in the trash or lying outdoors, filthy and gaunt, in posh neighborhoods.

The animal protection and control center in the capital’s Baruta neighborhood saw as many as 10 animals abandoned each day this summer, head veterinarian Russer Rios said. Up to about a year ago there were almost none.

“Now people just leave them here because they can’t take care of them,” Rios said.

Shelters are running classes teaching pet owners to look for food substitutes in the hopes of helping them maintain their pets through the crisis. At one private shelter in the working-class Caracas neighborhood of El Junquito, a popular alternative for dogs that would never have been considered in better times is chickenfeed.

“We have to give it to them because there’s nothing else,” Katty Quintas, a part owner of the Funasissi shelter, said as three skinny cats looked on hungrily from the top of a refrigerator. The shelter is now home to more than 200 cats and dogs.

One of the country’s largest animal shelters is run by Mission Nevado, a government program set up by socialist President Nicolas Maduro and named in honor of independence hero Simon Bolivar’s four-legged sidekick, dubbed “Nevado” for its white, snow-like fur. Program veterinarian Angel Mancilla said the shelter, which currently houses about 100 cats and dogs, has collapsed under the influx.

Pet owners say the price of dog food has more than doubled in recent months to $2 a pound, more than a day’s pay for those earning the minimum wage.

In August, as Parra and his parents in the central city of Barquisimeto struggled to get by on his father’s $23 monthly pension, he turned in desperation to a Facebook group that donates dog food to families that cannot afford it. But he received just one bag of food, enough to last a few weeks. He said he feels like he’s choosing each day between feeding himself and his parents, or his beloved pets.

“Sometimes we go to bed with empty stomachs,” he said. “It’s really hard.”

The problem is also affecting zoos and racetracks. Zoo workers in Caracas say they do not have enough food for large mammals like tigers and tapirs.

This spring 72 horses died from starvation or malnutrition at the Santa Rita racetrack in the western city of Maracaibo, which was closed due to problems with criminal gangs.

The National Institute of Racetracks said the horses died because owners and trainers were not feeding them.

Some pet owners who can’t bear to watch their animals waste away are looking for others to take them in.

Caracas homemaker Maria Galindo is offering Princess, her 5-year-old golden retriever, for adoption. So far the dog has survived on scraps the neighbors give her.

“We’re very sad to have to give her up, but the crisis is not giving us another option,” Galindo said, looking at Princess’ bones sticking out from her yellow fur. “You’re thinking, ‘If I give the dog something to eat, what will I feed the children?’”