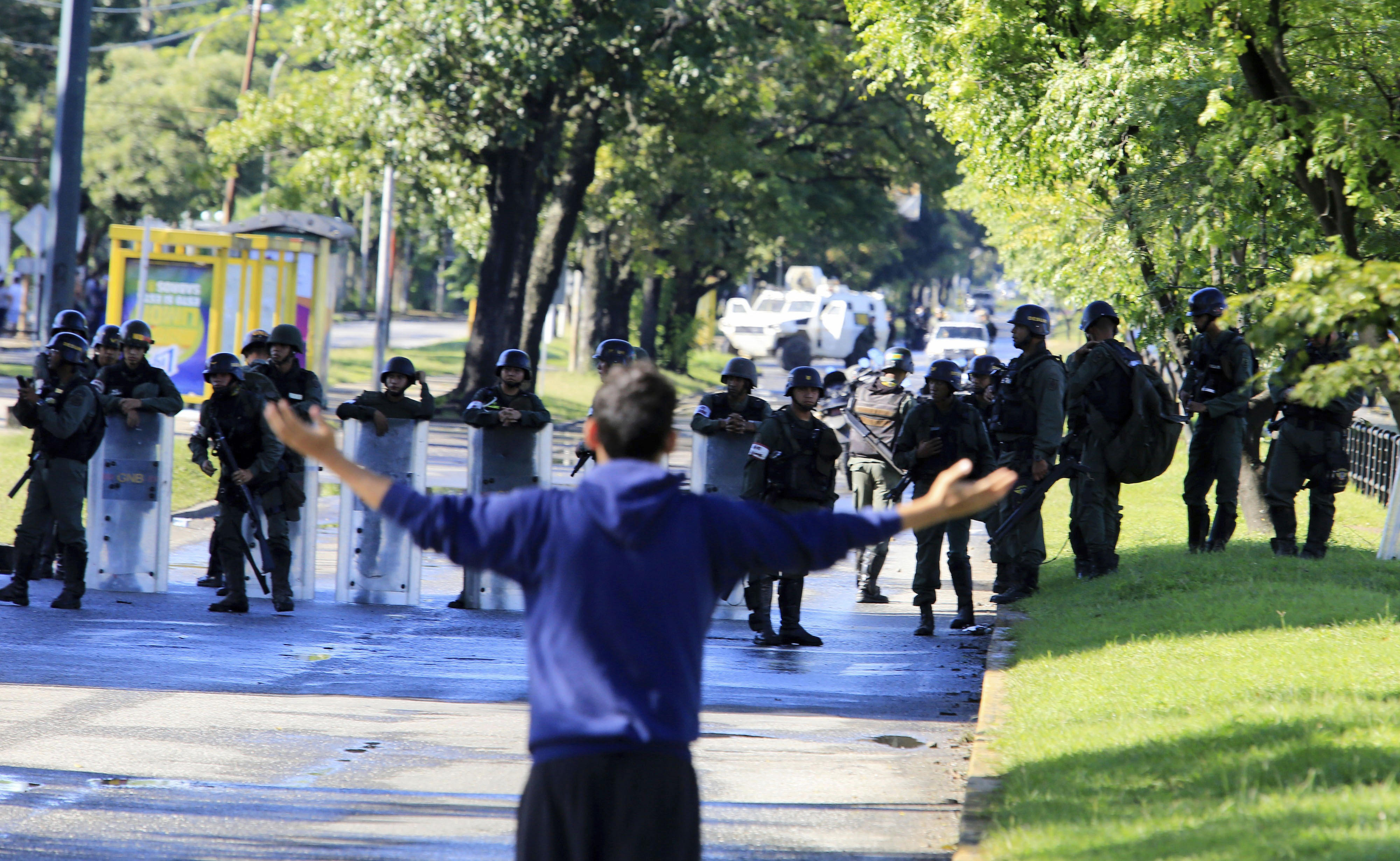 CARACAS, Venezuela -- Ruling party chief Diosdado Cabello said Venezuelan troops quashed a "terrorist" attack at a military base Sunday, shortly after a small group of men dressed in fatigues released a video declaring themselves in rebellion.

Cabello reported on Twitter that troops quickly contained the early morning assault at the Paramacay base in the central city of Valencia. Military officials said seven people were detained.

The announcement came after the group of men, some armed with assault rifles, announced they were disavowing the government of embattled President Nicolas Maduro and said any unit refusing to go along with their call for rebellion would be declared a military target.

"This is not a coup d'etat," a man who identified himself as Capt. Juan Caguaripano said in the video. "This is a civic and military action to re-establish the constitutional order."

The South American nation has for months been in the throes of a political crisis with protests that have left more than 120 dead, nearly 2,000 wounded and over 500 detained. The political standoff heightened this week with the installation of an all-powerful constitutional assembly that opposition members fear Maduro will use to tighten his grip on power, install a one-party state and remove foes from office.

Caguaripano, the leader of the alleged plot, has a history of rebellion.

In 2014, while a captain in the national guard and amid a previous wave of anti-government unrest, he released a 12-minute video denouncing Maduro. He later reportedly sought exile after a military tribunal ordered his arrest, appearing in an interview on CNN en Espanol to draw attention to dissatisfaction within the ranks over Venezuela's demise.

He returned to Venezuela to lead Sunday's uprising, said Giomar Flores, a mutinous naval officer who said he is a spokesman for the group from Bogota, Colombia.

Videos circulating on social media showed a police convoy speeding down a road amid the sound of apparent gunfire.

The Paramacay base, surrounded by a residential neighborhood in Valencia, is one of Venezuela's largest and houses some of the country's most important armaments including Russian-made tanks.

Cabello is the first vice president of the ruling socialist party and a member of the constitutional assembly. He has been a vocal proponent of using the legislative super-body to strip lawmakers in the opposition-controlled National Assembly of the immunity from prosecution that comes with office.

While in the military he took part in a failed 1992 coup led by Chavez, and he has held various high-ranking positions in the government. U.S. officials have accused him of involvement in drug trafficking, a charge he denies.

On Twitter Sunday, Florida Sen. Marco Rubio said the fact that Cabello had announced the news of the attack "shows who's in charge of security forces" in Venezuela.

Maduro is widely considered to still have the backing of the military, though it is difficult to know whether any discord may be brewing among the rank and file.

Opposition leaders have urged the military, which historically has served as an arbiter of Venezuela's political disputes, to break with Maduro over what his foes consider violations of the constitution.

But the president is believed to still have the military's support. He and his predecessor, the late President Hugo Chavez, worked diligently to assure their allegiance.

Like Sunday's uprising, most manifestations of dissent among troops have been small and isolated thus far.

"It's still very hard to know to what extent there are significant divisions within the military," Michael Shifter, president of the Washington-based Inter-American Dialogue, said recently.

The attack capped an already tense weekend during which a new constitutional assembly that will rule with nearly unlimited powers voted to remove chief prosecutor Luisa Ortega Diaz.

Ortega Diaz, a longtime government loyalist who has become one of Maduro's most outspoken critics, reiterated her refusal to recognize that decision at a public appearance alongside opposition leaders Sunday.

"I am still Venezuela's chief prosecutor," she said to applause.

The assembly ordered her replaced by Ombudsman Tarek William Saab, who was recently sanctioned by Washington for failing to protect protesters from abuses in his role as the nation's top human rights official.

He also announced that a new "truth commission" was being installed Sunday, setting up its offices in a historic building in Caracas that also houses the Ministry of Foreign Relations. The commission will have the right to require those it summons to testify and those who lie can be charged with perjury, the president said.

Maduro said the assembly is considering creating a law against "hate, intolerance and fascism" that would immediately punish those responsible for the current upheaval.

Maduro frequently refers to opposition leaders and protesters as "fascists."

The president singled out Julio Borges, the leader of the opposition-controlled National Assembly, warning him, "Justice is coming for you and the terrorists you've helped advance."