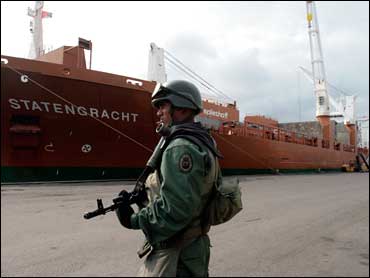 Venezuela's federal government seized seaports and airstrips in at least four states on Saturday, a move critics say is meant to limit the powers of mayors and governors opposed to President Hugo Chavez.

The takeover, ordered by Venezuela's socialist president last weekend and approved by lawmakers, aims to bring the country's major transportation hubs under federal control this year.

Military troops were dispatched to ports in the three Venezuelan states governed by Chavez opponents: Zulia, Carabobo and Nueva Esparta. Chavez said the takeover of air and sea ports in the state of Anzoategui, which is governed by a Chavez ally, was also under way.

The socialist leader said his government will formulate a "strategic investment plan" to modernize the ports and to guarantee the jobs of thousands of workers in the facilities.

Chavez has defended the move as a national security issue, but critics say they target facilities previously controlled by state authorities opposed to the president.

Chavez last week warned that any governors who challenged the takeover could end up in prison.

The measure also prohibits states and municipalities from collecting tariffs or tolls at transportation hubs or on highways, cutting off a key source of funding for local projects that could otherwise compete with federal handouts, Caracas-based economist Abelardo Daza said.

The order, along with a prosecutor's request Thursday that opposition leader Manuel Rosales be arrested on corruption charges, sparked protests in Venezuela's second-biggest city.

Rosales, who lost to Chavez in Venezuela's 2006 presidential election, is now mayor of that city, Maracaibo. He denies the charges and has not been arrested.

Venezuela's leader said he will ask lawmakers to increase sales taxes to 12 percent from 9 percent. The government's revised 2009 budget anticipates crude prices of $40 a barrel, not the $60-a-barrel forecast by lawmakers last year, Chavez said in a televised speech.

Venezuela will also sell an additional 22 billion bolivars ($10.2 billion) in local-currency bonds to raise cash this year, he said.