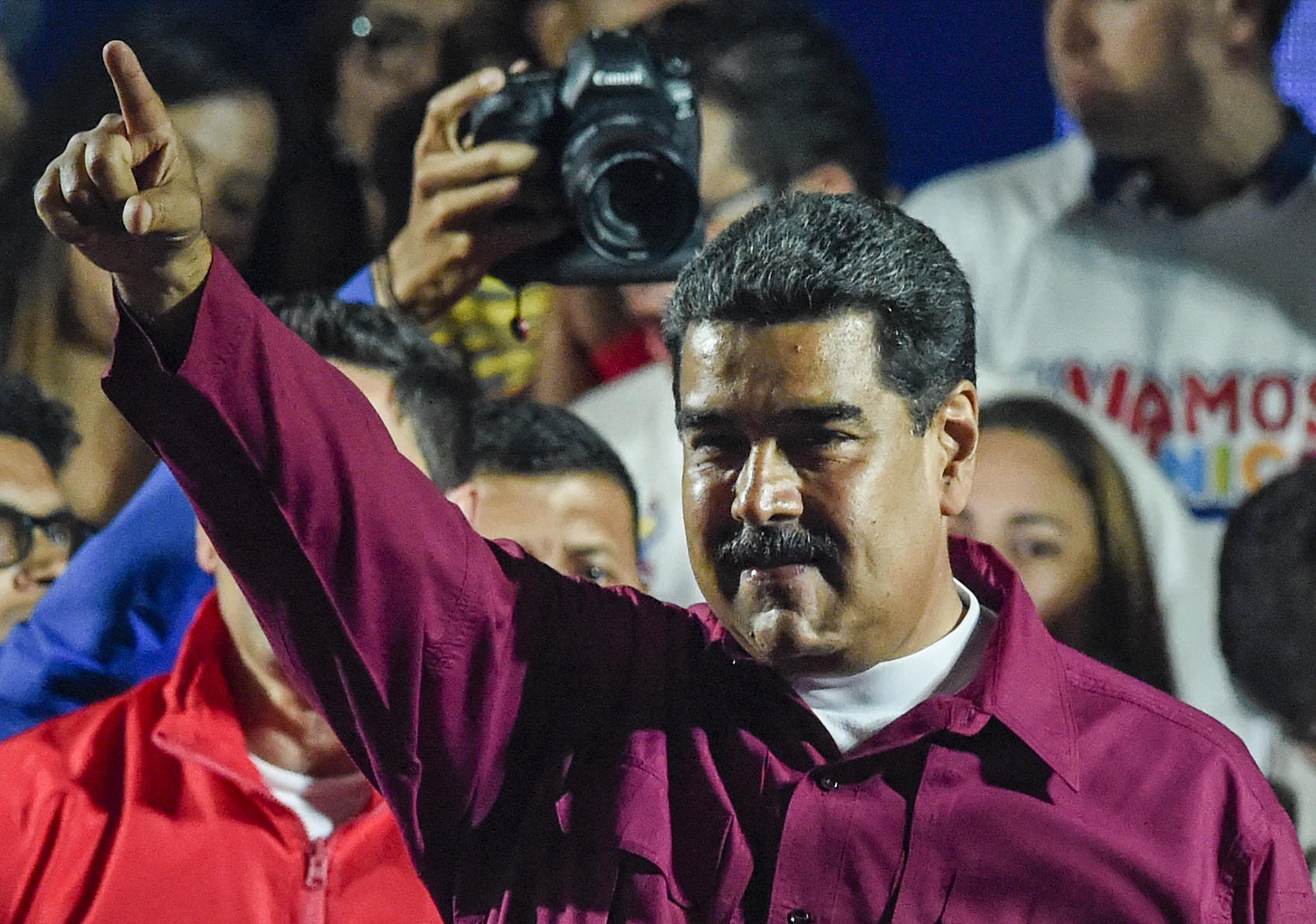 CARACAS, Venezuela -- Embattled socialist incumbent Nicolas Maduro won Venezuela's presidential election by a landslide in a disputed vote marred by irregularities and mass absenteeism that led his main rivals to call for a re-run to prevent a national social crisis from exploding.

The National Election Council announced that with more than 92 percent of polling stations reporting, Maduro won nearly 68 percent of the votes Sunday, beating his nearest challenger Henri Falcon by more than 40 points.

As the results were being announced, residents of downtown Caracas just a few blocks from where Maduro supporters were celebrating banged on pots and pans in protest. Falcon accused the government of buying votes and dirty tricks to boost turnout among poor voters most hurt by widespread food shortages and hyperinflation in what was once Latin America's wealthiest nation.

The election "without any doubt lacks legitimacy and we categorically refuse to recognize this process," Falcon told supporters minutes before the results were announced, vowing to fight on instead of joining a growing list of beleaguered anti-government politicians who've fled into exile of late.

The disputed victory is likely to heighten international pressure on Maduro. Even as voting was taking place Sunday, a senior U.S. official said the Trump administration might press ahead on threats of imposing crippling oil sanctions and Secretary of State Mike Pompeo warned "sham elections change nothing."

Pompeo also renewed the U.S. government's demand that the Maduro regime free a Utah man who has been held in Venezuela's most notorious prison for two years without trial. Joshua Holt made an emotional plea just last week for Americans' help getting out of the Caracas jail, saying in a clandestinely shot video that his life was threatened during a riot there. In two 20-second videos shot on a cell phone, a visibly distraught Holt suggested that his patience was running out with the U.S. government, which has made his release a top priority in its dealings with Venezuela's socialist government.

Falcon was joined in his demand for a new election by third-place finisher Javier Bertucci, who won around 11 percent of the vote. Bertucci, a TV evangelist who handed out soup at his campaign rallies, stopped short of challenging the results, partly blaming what he called a mistaken opposition boycott that led to a turnout of around 46 percent - the lowest in a presidential race in two decades of revolution.

But he said he nonetheless favors a new election soon and urged Maduro to do the courageous thing and desist from running. If Maduro presses forward, he warned, Venezuela will explode before his new six-year term is scheduled to begin in January.

A social crisis years in the making has worsened as Venezuela's oil production - the source of almost all of its foreign income - has collapsed to the lowest level in decades and financial sanctions by the Trump administration has made it impossible for the government to renegotiate its debts. More than 1 million people have fled the country in the past two years and 14,000 percent inflation has crushed the minimum wage to less than $2 a month.

Maduro, 55, immediately called for dialogue with his opponents and put the best face forward on what analysts said were nonetheless disappointing results underscoring how vulnerable his hold on power remains. Despite energetic campaigning his overall vote haul slipped by 1.6 million from 2013, when he was first elected after Hugo Chavez's death from cancer.

But he showed no sign of replaying Sunday's vote.

"We will be the most powerful and largest political force in Venezuela for a long time," he told a festive crowd of die-hard supporters who poured into the grounds of the presidential palace to celebrate. "It doesn't faze me when they say I'm a dictator."

He promised to spend the next two years before scheduled congressional elections repairing an economy he says has been badly damaged by mafias backed by Colombia and the U.S. He also slammed Falcon, who like him was an acolyte of Chavez, saying he had never seen a candidate dispute results before they were even announced.

"Sooner or later, they all break in the face of threats from the imperialists," he said, pleading with the U.S. to reconsider its belligerence.

Both of Maduro's opponents accused electoral authorities of being blind to blatant violations before the vote and on election day. Falcon said that at 86 percent of voting centers ruling party activists set up so-called "Red Points" where they scanned on cellphones QR codes on government-issued "Fatherland Cards."

Some poor cardholders in Caracas - there are 16.5 million nationwide - said they hoped Maduro would deliver on his campaign promise of a "prize" to those who demonstrated their loyalty. Maduro accused his opponents of trying to "demonize" a program intended to address the social crisis and not assert political control.

Under Venezuela's electoral law, any political activity must take place at least 650 feet from voting centers. But most "Red Points" were just a few steps away. As in past elections, government supporters driving around in vans with Maduro posters could also be seen transporting voters to polling sites.

Luis Emilio Rondon, the sole opposition voice on the electoral council, backed Falcon and Bertucci's claims of irregularities and said he too refused to recognize the results.

National Electoral Council President Tibisay Lucena acknowledged a handful of complaints, but insisted they were minor compared to past elections.

"The people of Venezuela have made their pronouncement and we ask everyone, nationally and international, to respect the results," she said.

Voting centers appeared largely empty in opposition areas across Venezuela and were even lackluster in government strongholds. Turnout in the previous three presidential elections averaged 79 percent.

Opposition leaders said the lifeless voting centers were evidence that Venezuelans heeded their call to abstain from voting in an election they contended was certain to be rigged in Maduro's favor.

"This was a farce by a dictator that wants to stay in power without popular support," said lawmaker Juan Pablo Guanipa, speaking on behalf of the newly created Broad Front coalition that had been behind the stay-at-home strategy.

Opinion polls say the overwhelming majority of Venezuelans distrust the electoral council. Turnout figures in last year's elections for a constitutional assembly, which the opposition also boycotted, were inflated by at least 1 million votes, according to the company that provided technology for Venezuela's electronic voting machines for more than a decade.

But despite the unleveled playing field and concerns of fraud, some government critics nonetheless questioned the wisdom of not participating in an election that looked to be its best chance in years to defeat Chavismo.

"If you're sick and the doctor gives you few days to live, you don't lie in bed waiting to die. You seek treatment," said Nayra Martinez, a city employee in the wealthy Caracas district of Chacao who decided to buck her party's call to abstain. "That's what we need to do with our country. Venezuela is very sick and we the people are the medicine."