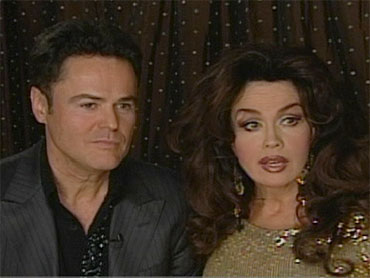 When it comes to celebrating the holidays, images of Las Vegas don't exactly come to mind. But this season, Sin City is hoping to boost its fortunes with the opening of the new City Center -- an $8.5 billion dollar gamble.

While it's a huge risk, many are hoping City Center is a gift that will keep on giving -- there hasn't been a lot to cheer about this yearin Vegas, which has been hit hard by the recession.

Still, Donny Osmond told CBS News, "Christmas in Vegas is so different than any other place. It's not about cuddling up next to the fireplace--this is about a neon party land."

The City Center has set the bar pretty high this holiday season, Kauffman said, but added visitors shouldn't count out the rest of the Vegas strip.

Donny and Marie Osmond have added holiday music to their show. Marie, a mother-of-eight, even moved her family to Las Vegas.

Donny added, "If you want an entertaining Christmas, this is the place to be."

At the Bellagio, thousands have discovered this winter wonderland in the desert. The Four Seasons Gingerbread Village features an edible carousel, and a quarter million cranberries fill the Palazzo's pool.

And do you MISS the cold? Mandalay Bay offers faux furs and cold drinks inside the minus five degree ice lounge -- and snow falls in the Qua Spa at Caesar's Palace.

Cher is also strutting her stuff at Caesar's Palace where Jerry Seinfeld will make a rare appearance. Also, Garth Brooks is out of retirement playing the Wynn. John Mayer will also appear at The Hard Rock Hotel, and the Black Eyed Peas will ring in the New Year in Vegas.

Kauffman added on the broadcast this holiday season is serious business for Las Vegas. City Center alone, she said, has opened up 12,000 new jobs for a city hit hard by the recession.