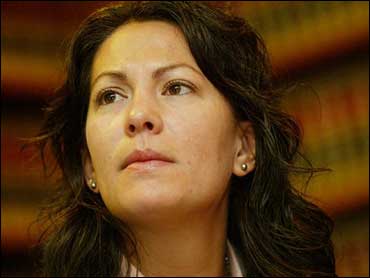 A former armored car driver who turned herself in after more than a decade in hiding pleaded guilty Wednesday in a $2.9 million heist on the Las Vegas Strip.

Heather Tallchief, 33, surrendered in September in Las Vegas after living for years in Amsterdam under an assumed name. Her lawyers said she was tired of hiding and wanted her son to have a normal life.

Tallchief pleaded guilty to bank and credit union embezzlement and passport fraud. She could get up to 40 years in federal prison at sentencing March 2, but her lawyer, Robert Axelrod, said he was confident she would get no more than 10 years.

Tallchief acknowledged driving an armored car full of cash from the Circus Circus hotel-casino to a rented garage in 1993 and helping her boyfriend, Roberto Solis, load the money into another vehicle. The couple then fled the country.

Tallchief has said that Solis brainwashed her into committing the crime. Solis, an ex-convict and the father of Tallchief's son, remains a fugitive.

Axelrod told the judge that Tallchief does not know where the money is and has not seen Solis in 10 years.

Tallchief agreed to repay the stolen amount from any money she receives from book or movie deals.