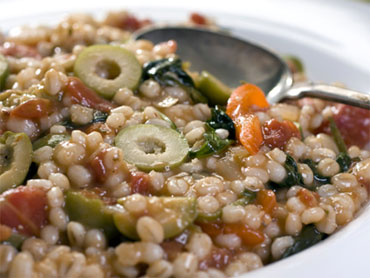 Once mocked as a fringe diet for sandal-wearing health food store workers, veganism is moving from marginal to mainstream in the United States.

The vegan "Skinny Bitch" diet books are best-sellers, vegan staples like tempeh and tofu can be purchased at just about any supermarket, and some chain restaurants eagerly promote their plant-only menu items. Today's vegans are urban hipsters, suburban moms, college students, even professional athletes.

"It's definitely more diverse. It's not what you would picture 20 years ago, which is kind of hippie, crunchy," said Isa Chandra Moskowitz, author of vegan cookbooks like the new "Appetite for Reduction." She says it's easier being a vegan now because there is more local produce available and more interesting ways of cooking.

"It's not just steamed vegetables anymore and brown rice and lentils," she said.

Veganism is essentially hard-core vegetarianism. While a vegetarian might butter her bagel or eat a cake made with eggs, vegans shun all animal products: No meat, no cheese, no eggs, no honey, no mayonnaise. Ethical vegans have a moral aversion to harming animals for human consumption, be it for a flank steak or leather shoes, though the term often is used to describe people who follow the diet, not the larger philosophy.

It's difficult to come up with hard numbers of practicing vegans. There's a blurry line between people who define themselves as vegan and vegetarian and some eaters dip in and out plant-only diets. For instance, New York Times food writer Mark Bittman has described his "vegan till 6" health plan, in which he becomes more omnivorous in the evening.

In a 2009 survey, advocates at the not-for-profit Vegetarian Resource Group reported about 1 percent of Americans are vegan, roughly a third of the people who reported being vegetarians. A separate survey released last year by the same group found a similar breakdown for Americans aged 8 to 18.

That makes veganism something short of a fad sweeping the nation like low-carb once did. Consider that while Kraft Foods reports that it shipped out more Boca Original Vegan Burger Patties and Boca Ground Crumbles last year, the increase was a modest 1 percent. Still, there are plenty of signs that vegans have pushed beyond their old, exclusive cocoon that once inspired celebrity chef Anthony Bourdain to mock them as the "Hezbollah-like splinter faction" of vegetarians.

Exhibit A would be the "Skinny Bitch" diet books, which provide vegan lifestyle tips in a blunt, girlfriend-on-the-phone style (Sample passage: "Soda is liquid Satan. It is the devil."). Actress Alicia Silverstone added a dose of star power to the vegan cause more recently with "The Kind Diet," a No. 1 best-seller. Vegan diets also have been touted by other celebrities, including Emily Deschanel in "Bones" and Lea Michele of "Glee."

Veganism has been buoyed by the same health-conscious wave that has drawn Americans in unprecedented numbers to low-fat, vegetarian and organic foods. The idea of eating lower on the food chain is especially attractive to environmentally conscious consumers, since large-scale meat production is a major source of greenhouse gases.

Veganism also provides a safe harbor for the growing number of people concerned about where their supermarket meat comes from. Critics of industrial-scale food processing like writer Michael Pollan have been gaining a wider audience in recent years.

And - sign of the times - some famous guys are eating vegan now, too.

Bill Clinton, known for his burger-loving ways when president, has credited his trim build at his daughter Chelsea's wedding this summer to a "plant-based diet" (though he eats a little fish sometimes). Even former heavyweight champion Mike Tyson has talked up his vegan diet.

And vegan cookbooks, once a niche product, are coming out at such a fast clip that there are now sub-niches. Da Capo Press' 20 vegan cookbooks in print include one on vegan soul food and another with Latin vegan recipes. A book of vegan recipes containing alcohol, "The Tipsy Vegan" is upcoming.

Abstaining from animal products is an ancient practice found in cultures worldwide. But veganism never got traction in meat-loving America. Tracye McQuirter, a vegan for 23 years and author of "By Any Greens Necessary," a vegan guide aimed at black women, said things were different until about a decade ago. While she was part of a vegan community in her hometown of Washington, she says there was little understanding beyond it.

"People did not know what it meant," McQuirter said. "There were not a lot of options in terms of grocery stores. There was no Whole Foods... We had to basically cook everything for ourselves."

That's changed. More than half the 1,500 chefs polled by the National Restaurant Association for its new "What's Hot in 2011" list included vegan entrees as a hot trend. Vegan entrees came in at No. 71 out of 226 trends (beating out organic beer and drinkable desserts) - that's far from No. 1, but evidence of veganism making inroads beyond urban strongholds like New York City and Los Angeles. Some chain restaurants like Souplantation and Pizza Fusion even mark vegan items on their menus.

In Fort Lauderdale, Fla., Roseann Marulli Rodriguez, a blogger for the SuperVegan website, said while there are not many vegan restaurants in her area, her local supermarket has "fake" chicken tenders and "fake" bacon.

"It's definitely widening in scope," said Rodriguez, a recent New York City transplant who has been eating vegan for five years, "and I think that's why more people are doing it, because it's getting easier."