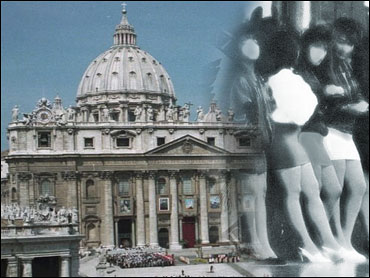 The Vatican is calling for clients of prostitutes to not only face legal action but to also receive counseling and other help to stem what it called a form of "modern day slavery."

The Vatican's office for migrants and itinerants also called for greater protection of women through better enforced laws on prostitution and trafficking. It also urged the church and community at large to provide alternatives to women who are trafficked or otherwise forced into prostitution.

The recommendations are contained in a communiqué issued Monday that stemmed from a two-day symposium on prostitution and human trafficking that the Vatican hosted in June.

In the document, the Vatican called for the clients of prostitutes to be punished, since they fuel the industry, but also to be counseled about why they are buying sex and how it demeans women.

"The 'client' needs more than social condemnation and having to face the full rigors of the law," the communiqué said. "He must also be helped to face his deeper problems and to find other ways of dealing with his personal needs. Buying sex from a prostitute does not solve problems that arise from loneliness, frustration or a lack of true relationships."

Women forced into prostitution must be protected by the law because they are victims of violence and exploitation and have had their fundamental human rights violated, it said.

But beyond legal protection, women who work as prostitutes must be given an alternative — including a home and community where they can begin to rebuild their lives, it said.

It said the church can play an important role in freeing women from prostitution, including providing them shelter, legal assistance, counseling and other services. The church should also advocate more against what it called the "demeaning portrayal of women in advertising."

During the symposium, which brought together several dozen religious and lay people, the issue of providing condoms to prostitutes to protect them from AIDS was raised. There was no specific mention of the issue in the communiqué. The Vatican opposes artificial contraception.