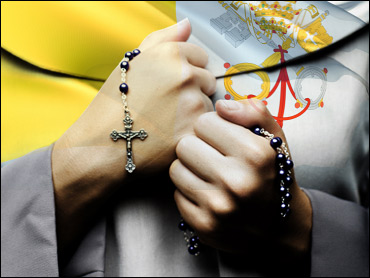 Pope Benedict XVI, preoccupied for months by the clerical sex abuse scandal, shuffled the Vatican bureaucracy on Wednesday and named the head of a new office designed to fight secularism in the West.

Benedict tapped a trusted Italian, Monsignor Rino Fisichella, to head the Pontifical Council for Promoting the New Evangelization, which is designed to reinvigorate Christianity in the parts of the world where it is falling by the wayside.

Also Wednesday, Benedict named Canadian Cardinal Marc Ouellet to head the powerful Congregation for Bishops, which vets bishops nominations worldwide. Ouellet, the 66-year-old archbishop of Quebec, replaces Cardinal Giovanni Battista Re, who is retiring after nearly a decade in the post.

Ouellet has been criticized for his abortion comments and handling of the church's sex-abuse scandal, the Globe and Mail reports.

Benedict also moved his New York-based U.N. ambassador to Poland to serve as papal nuncio and named a new head of the Vatican's bioethics advisory board, the Pontifical Academy for Life.

The long-rumored appointments were announced as the pope wraps up key Vatican business before going on vacation for the rest of the summer at the papal retreat in Castel Gandolfo, in the hills south of Rome.

The appointment of Fisichella marks a tacit acknowledgment by Benedict that his efforts to reinvigorate Christianity in places like Europe, where it has long had roots, needs a focused boost.

Benedict announced the creation of the new office earlier this week, saying it would promote Christianity in countries where the church has long existed "but which are living a progressive secularization of society and a sort of 'eclipse of the sense of God."'

Benedict has made reinvigorating the faith in Europe a priority of his papacy, and has focused his foreign trips on the continent as a result. His 2010 travel itinerary lists Malta, Cyprus, Portugal, Britain and Spain.

Other positions are expected to be announced soon, including a new head for the Vatican's Pontifical Council for Christian Unity, the Vatican office that oversees relations with other Christians and Jews. Italian media have said its current head, the retiring Cardinal Walter Kasper, will be replaced by Swiss Bishop Kurt Koch of Basel.