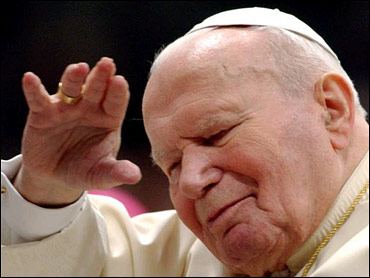 Torture, burning at the stake and other punishment for the faithful condemned as witches or heretics by church tribunals during the Inquisition was not as widespread as commonly believed, the Vatican said Tuesday.

Pope John Paul II praised the research, recalling that in 2000, the church asked pardon for "errors committed in the service of the truth through recourse to non-evangelical methods."

"In the opinion of the public, the image of the Inquisition represents almost the symbol ... of scandal," the pontiff wrote in a letter about the research. "To what degree is this image faithful to reality?"

In 2000, John Paul apologized for the sins of Roman Catholics made in the name of their faith, including abuses during the Inquisition - a crackdown by church officials from the 13th to the 19th centuries, on individuals suspected of being in conflict with church teaching.

Catholics accused of being heretics, witches or others considered of dubious faith, including Muslims and Jews who had converted to Catholicism, were among the targets.

At a news conference to present a 783-page book on the findings, church officials and others involved in the project said statistics and other data demolished long-held beliefs about the Inquisition.

"The recourse to torture and the death sentence weren't so frequent as it long has been believed," said Agostino Borromeo, a professor at Rome's Sapienza University.

For some, the scholars' conclusions had limited value.

"Vatican research findings are interesting, but they cannot excuse the work of the Inquisition that terrorized and led to the expulsion of thousands from their homes," said David Rosen of the American Jewish Committee.

Borromeo, who oversaw the volume, said that while there were some 125,000 trials of suspected heretics in Spain, researchers found that about 1 percent of the defendants were executed.

In Portugal, 5.7 percent of the more than 13,000 people tried before church tribunals in the 16th and early 17th century were condemned to death, he said. In many cases, courts ordered mannequins to be burned when the condemned escaped capture.

Many of the executions during the centuries spanned by the Inquisition were carried out by non-church tribunals - including witch hunts in Protestant countries, Borromeo said.

The study grew out of a 1998 conference at the Vatican of 50 historians and other experts from Europe and North America.

"Before seeking pardon, it is necessary to have a precise knowledge of the facts," John Paul wrote in his letter, expressing "strong appreciation" for the research. He said his 2000 prayer for pardon "was valid both for the dramas tied to the Inquisition as well as for the wounds of memory that are the consequence of it."

The pontiff, who lived through the horrors of Nazism in his native Poland, has dedicated a good deal of his papacy to the theological question of asking forgiveness.

He has prayed for forgiveness for the wrongdoing of the faithful in slavery and the Holocaust, among other events. The Inquisition's horrors are delicate for the church, since it was an ecclesiastical institution, ordered by popes.

Michael Marrus, a Holocaust historian at the University of Toronto, ventured that the Vatican's promotion of the findings could reflect the opinions of those in the church hierarchy who don't share the pope's passion for apologies.

Leaving aside what he called the "numbers game" of Inquisition statistics, Marrus said: "While the pope is a great promoter of the apologies, not everyone in the curia, and certainly not everyone in church leadership, shares this disposition."

Among those the Inquisition went after was the scientist Galileo Galilei, who was "rehabilitated" by the Vatican during John Paul's papacy. Theresa of Avila and Ignatius of Loyola, destined to become saints, were probed for heresy.

Among the targets were Waldensians, members of a pre-reformation religious sect that was later declared heretical. The group later joined the Protestant fold.

"If there are many or few cases, it doesn't matter. What's important is you don't say, `I am right and you are wrong and I burn you," said Thomas Noffke, a Waldensian pastor in Rome, where a Waldensian preacher was hanged and then burned in 1560.

John Paul said theologians should keep in mind "the dominant mentality in a determined era."

Borromeo denied the Vatican was playing down the wrongs of the Inquisition. "I don't want to say that the Inquisition was an ethical institution," he told Associated Press Television News. "It doesn't change the nature of the problem - people were tried for their religious beliefs. But for historians, numbers have a significance."

Cardinal Georges Cottier, a Vatican theologian, stressed the need to have the facts before making judgments about history. "You can't ask pardon for deeds which aren't there," he said.

But one of those at the 1998 conference, Italian Renaissance history professor and Inquisition expert, Carlo Ginzburg, had his doubts about using statistics to reach a judgment about the period.