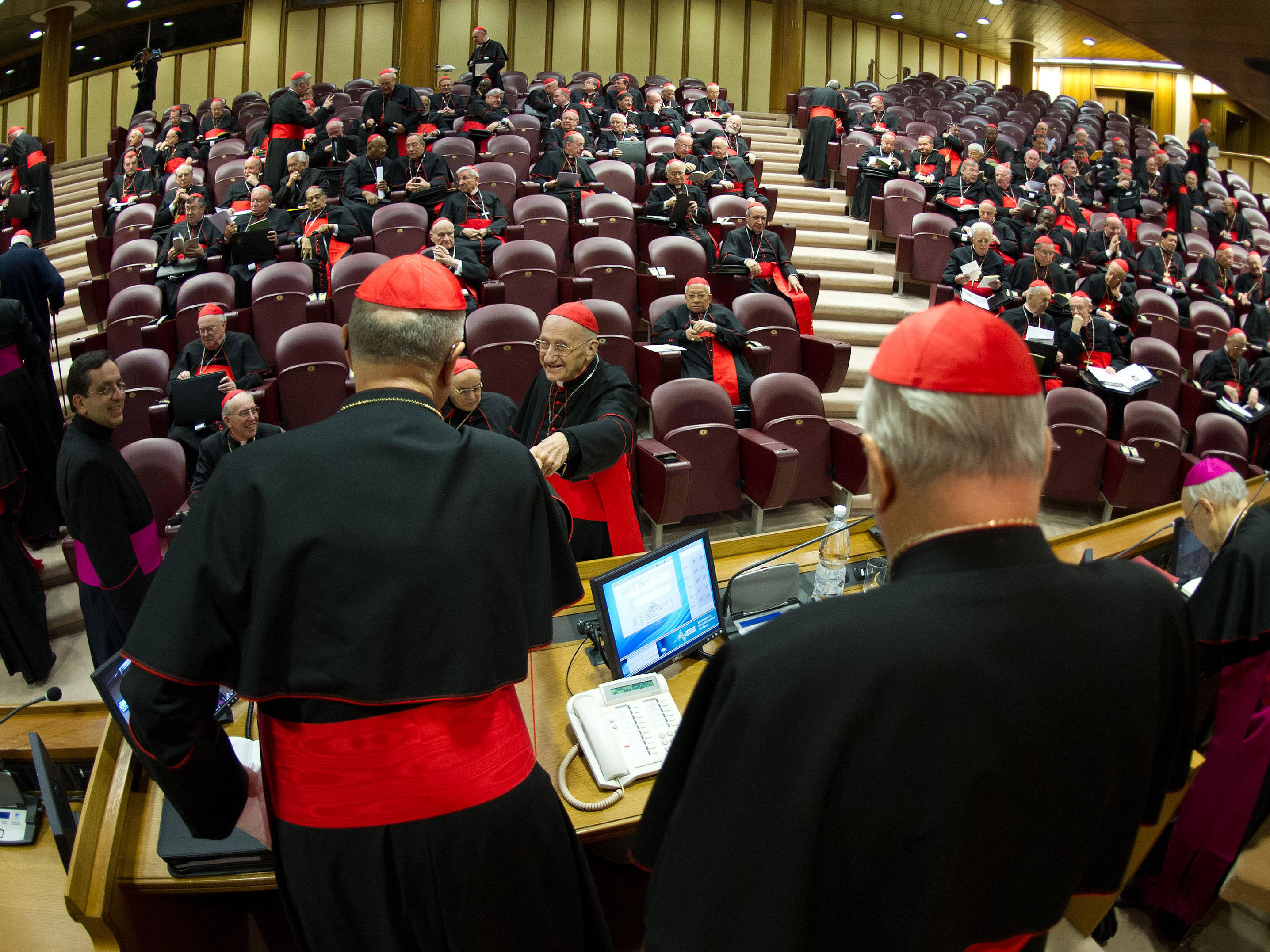 VATICAN CITY Cardinals said Monday they wanted to be briefed about the true state of Vatican dysfunction before they elect the next pope, evidence that the scandal over leaked papal documents is casting a shadow over the conclave and setting up one of the most unpredictable papal elections in recent times.

The Vatican said 103 of the 115 voting-age cardinals attended Monday's inaugural session of the pre-conclave meetings, at which cardinals organize the election process, discuss the problems of the church and get to know one another before voting.

The red-capped "princes" of the church took an oath of secrecy and decided to pen a letter of "greeting and gratitude" to Benedict XVI, whose resignation has thrown the church into turmoil amid a torrent of scandals inside and out of the Vatican.

"I would imagine that as we move along there will be questioning of cardinals involved in the governing of the Curia to see what they think has to be changed, and in that context anything can come up," said U.S. Cardinal Francis George.

"But they do create context for our discussion. We follow the press, sometimes happily and sometimes not," he said.

The Vatican's administrative shortcomings were thrust into stark relief last year with the publication of documents stolen from Benedict XVI's desk that exposed the petty infighting, turf battles and allegations of corruption, nepotism and cronyism in the highest echelons of the Catholic Church.

The pope's butler was convicted of stealing the papers and leaking them to a journalist; he eventually received a papal pardon.

The emeritus pope, meanwhile, remained holed up at the papal residence at Castel Gandolfo, his temporary retirement home while the machinations to pick his successor kick into gear in Rome.

No date has been set yet for the conclave and one may not be decided on for a few more days; the dean of the College of Cardinals has said a date won't be finalized until all the cardinals have arrived.

Twelve more voting-age cardinals were en route to Rome; some had previously scheduled speaking engagements, others were due in later Monday or in the coming days, the Vatican said.

Speculation has mounted that the conclave might begin around March 11, with the aim of having a new pope installed by March 17, the Sunday before Palm Sunday and the start of Holy Week.

With 115 electors, 77 votes are needed to reach the two-thirds majority to be elected pope.

Those who were in Rome prayed together Monday, chatted over coffee and took an oath to maintain "rigorous secrecy with regard to all matters in any way related to the election of the Roman Pontiff."

The core agenda item is to set the date for the conclave and put in place the procedures to prepare for it, including closing the Sistine Chapel to visitors and getting the Vatican hotel cleared out and swept for bugs or other electronic monitoring devices, lest anyone try to listen in on the secret conversations.

Yet the first day of discussion was rocked by new revelations of scandal, with Scottish Cardinal Keith O'Brien admitting that his "sexual conduct has fallen below the standards expected of me as a priest, archbishop and cardinal."

O'Brien last week resigned as archbishop of St. Andrews and Edinburgh and said he wouldn't participate in the conclave after four men came forward with allegations that he had acted inappropriately with them — the first time a cardinal has stayed away from a conclave because of personal scandal.

The Vatican on Monday refused to confirm whether it was investigating O'Brien, even though the Scottish church's press office said the allegations had been forwarded to the Vatican and that it expected Rome would pursue the case.

Pressed to respond to reports of a fifth accuser who reportedly approached the Vatican directly in October with accusations, a Vatican spokesman, the Rev. Thomas Rosica, read O'Brien's statement admitting to sexual misconduct and said the Vatican would say no more.

The Vatican and cardinals attending the session said the O'Brien case didn't come up during formal or informal conversations. The morning session, cardinals said, was devoted to prayer and procedural matters.

"It's a tragic moment for him," George said.

At a briefing discussing the priorities for the future pontificate, George said the next pope will have to follow canon law and keep priests who molested children out of parishes.

"He obviously has to accept the universal code of the church which is zero tolerance for anyone who has ever abused a minor child and therefore may not remain in public ministry in the church," George said. "That has to be accepted. I don't think that will be a problem."

Appearing on CBS' "Face the Nation" Sunday, Cardinal Timothy Dolan, archbishop of New York, said "there's no cardinal with his head in the sand when it comes to these issues."

Separately, the Vatican is still reeling from the fallout of the scandal over leaked papal documents, and the investigation by three cardinals into who was behind it.

American cardinals seem particularly keen to get to the bottom of the Vatican dysfunction, and they have had access to a very knowledgeable tutor, Archbishop Carlo Maria Vigano, the Vatican's ambassador to Washington.

Vigano's letters to the pope were the most explosive leaks of documents last year; in them, he pleaded with Benedict not to be transferred after exposing alleged corruption in the awarding of Vatican contracts that cost the Holy See millions of dollars.

He was named the Vatican's ambassador to Washington, and as such has been able to give U.S. cardinals a clear-eyed view of the true state of the Vatican, said Corriere della Sera commentator Massimo Franco.

"They have appreciated him very much because he doesn't read the Vatican situation with a rosy lens, a rosy view," Franco said in an interview.

In his new book "The Crisis of the Vatican Empire," Franco paints a portrait of a Vatican completely falling apart, with financial scandals at its bank, backstabbing among its ruling class and the sex abuse scandal discrediting the church on the global stage.

"If we think of the pope, in a way the pope decided to sacrifice himself because he couldn't change anything," Franco said.

Coupled with the upheaval of Benedict's resignation, the scandals have contributed to create one of the most unclear papal elections in recent times.

"It will be a very open conclave with a very unpredictable outcome," Franco said.

In one of his last audiences before resigning, Benedict gave the three cardinals the go-ahead to answer their colleagues' questions about the results of their investigation.

"There are members of the College of Cardinals who are interested in having information that has to do with the situation in the Curia and the church in general and will ask to be informed by their colleagues," Lombardi said.