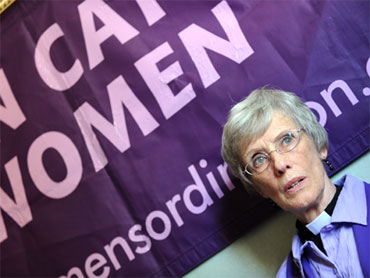 New Vatican rules for how the Roman Catholic Church responds to clerical sex abuse claims generated plenty of criticism last week for not being tough enough. At the same time, the rules also put the Vatican on the defensive for grouping pedophilia allegations with the "grave crime" of attempting to ordain women into the church.

A letter from the Vatican's Congregation for the Doctrine of the Faith, which handles sex-crime allegations, to bishops around the world represents a permanent piece of church legislation. The new rules, publicly revealed for the first time Thursday, list the attempted ordination of women as a "grave crime" subject to the same set of procedures and punishments meted out for sex abuse.

That drew immediate criticism from women's ordination groups, who said making a moral equivalent between women priests and child rapists was offensive.

"The idea that women seeking to spread the message of God somehow defiles the Eucharist reveals an antiquated, backwards church that still views women as unclean and unholy," said Erin Saiz Hanna, executive director of the Women's Ordination Conference, a U.S.-based organization that works to ordain women as priests, deacons and bishops.

Pope John Paul II and Pope Benedict XVI have said the question of ordaining women priests - often raised as an antidote to the priest shortage and to bring about more gender equality in the church - is not up for discussion.

The Vatican in 2007 issued a decree saying the attempted ordination of women would result in automatic excommunication for the woman and the priest who tries to ordain her. That is repeated in the new document, adding that the priest can also be punished by being defrocked.

At a briefing Thursday, Monsignor Charles Scicluna defended the inclusion of both sex abuse and ordination of women in the same document as a way of codifying two of the most serious canonical crimes against sacraments and morals that the congregation deals with.

"They are grave, but on different levels," he said, and noted that the document also lists crimes against the sacraments including apostasy, heresy and schism for the first time.