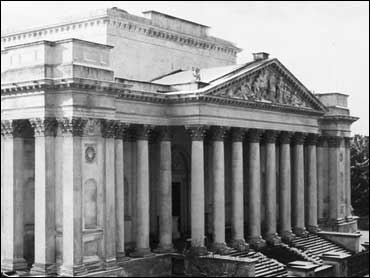 A British museum visitor who tripped on his shoelace and shattered three 300-year-old Chinese vases called it a "regrettable accident" Monday, adding that he has been indefinitely banned from returning to the museum.

The Fitzwilliam Museum in Cambridge said last week that a visitor broke the Qing dynasty vases when he stumbled down a stairway and brought the vases crashing to the floor.

"I snagged my shoelace, missed the step and crash, bang, wallop. There were a million pieces of high quality Qing ceramics lying around underneath me," said Nick Flynn, 42, of Fowlmere, a village near Cambridge about 50 miles north of London.

"I have a few household accidents, maybe drop a cup or two or smash a plate, but nothing like this has ever happened to me before," he told British Broadcasting Corp. radio.

The vases, dating from the late 17th or early 18th century, were donated to the museum in 1948 and were among its best-known artifacts. They had been sitting on a window sill beside the staircase for 40 years.

The museum did not identify Flynn, but he was tracked down by British newspapers.

He said the fall had been a "regrettable accident" but he was surprised the artifacts — reported to be worth $175,000 — had been left on an open window ledge.

"I thought they might take a little bit better care of them," he told the BBC.

Flynn said he received a letter from Fitzwilliam director Duncan Robinson "not to visit the museum again in the near future."

The museum has said that it would try to put the vases back together.