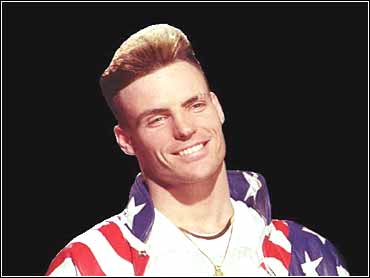 Rapper Vanilla Ice spent the night in jail after being arrested following a domestic dispute.

The 32-year-old singer, whose real name is Robert Van Winkle, placed his hand over his wife Laura's mouth "to shut her up" as the couple drove on Interstate 595 in Davie, Fla., police said.

Van Winkle admitted ripping out some of her hair, but said he did so to keep her from jumping out of the truck's window, police said.

His wife told police she feared her husband and that the couple's children witnessed the offense, police said.

The singer, who in 1990 sold 15 million copies of the single Ice, Ice Baby, was arrested Wednesday and released from Broward County Jail the next day on $3,500 bail.

"We had a heated argument," he said. "That's about it. It's not that big of a deal. I would never hit my wife or any girl or anything like that ... I love my wife, I love my kids, my life's fine, everything's good, no hitting, no drugs."

Prosecutors have 21 days to file charges in the case, according to Davie Police Lt. Rick Smith.