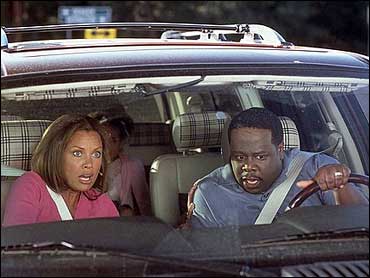 Vanessa Williams seems to have done it all. She is a platinum-selling recording artist, Tony-nominated Broadway actress, and a movie star. She is also a mother of four, which was good training for her latest project.

In her latest film, "Johnson Family Vacation," she plays the mother of three who is on a road trip to her husband's family reunion.

When she was growing up, she tells The Early Show co-anchor Harry Smith, she used to take lots of road trips with her family.

"My parents are both teachers, so we had the summers off," she recalls. "Not only was my dad a music teacher, but liked to build as a hobby. He was building a house in the Poconos, so we would take the ride there. And in Westchester, almost every weekend, we would camp. And my grandmother was eight hours away in Buffalo. We had a big, old van and I had my front bunk and my brother the back bench."

Smith says he has caught glimpses of Williams in her role as a mother. Asked if she is strict with her own children, she says, "I don't think I'm strict, but I do give pretty clear boundaries of what I expect and what you're supposed to deliver."

Two years ago, in an interview with Ebony magazine, Williams said there is no such thing as balance. Asked what she means by that, she says, "I think there's a time to work, and everyone has to kind of adjust. And then there's a time to relax, and be the mom or take the kids on vacation when you need to wind down. So it's a matter of planning, and being able to map out your year or your week or let's start with the day. It is just being multi-tasking and being available."

Next for Williams is a Christmas CD she will record this month in London. "I did a Christmas album in '96 and it still has longevity, so this will be like kind of volume two."

Asked if she has plans to move to California since that is where her movie business is, Williams says, "New York is my home. It's my post. Broadway is really my life. And I always try to go back to reconnect. Because I think that's really my forte, being able to do musical theater, sing and dance and act and really create a role. I'll never give it up."