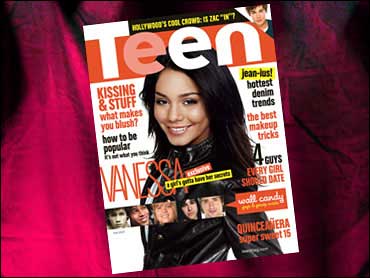 "High School Musical 2" star Vanessa Hudgens probably won't be the next young star to get popped for a DUI or snapped going commando on an evening out.

"I'm a good kid," she tells Teen magazine. "I've been brought up with very good morals, and I'm not going to go out and do something I don't want other kids to do."

Hudgens believes that she's part of a new crop of well-behaved rising stars who are ready to take the place of the hard-partying young Hollywood crowd.

"I love being a role model because, in Hollywood, there aren't a lot of role models to look up to," she says. "The fact that there's a whole bunch of good kids coming out who are now stepping into the limelight, I'm very proud of that."

The 18-year-old actress did the 40-city "High School Musical" concert tour this winter. Before that, she went on the road with The Cheetah Girls. Maybe she's just too tired to party like a rock star.

"Touring is tough. You're almost in a haze because you don't really know where you are half the time," she says. "You're in a hotel room one moment, and the next thing you know, you're onstage performing for 60,000 people, then you're back on an airplane. It's very hectic."

"I will say who I'm dating, but I won't talk about it. I just like to keep my relationships to myself," she says.

Good girls, after all, don't kiss and tell.

Hudgens' interview is in the fall 2007 issue of Teen, out Sept. 4.
By Judy Faber