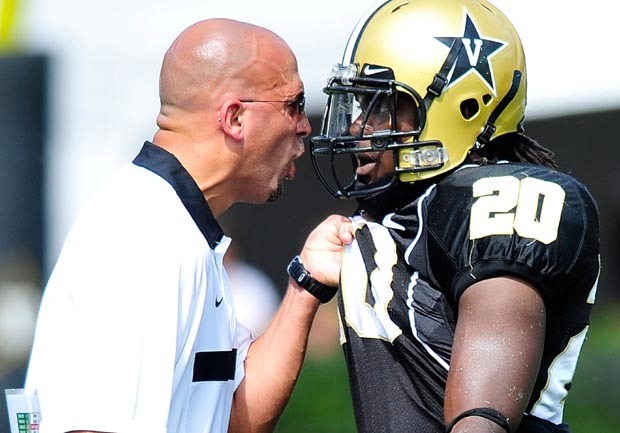 Vanderbilt football coach James Franklin has apologized for saying that he only hires assistant coaches if they have attractive wives.

Franklin made the comments in a radio interview with Nashville's 104.5 "The Zone" earlier this week:

"I've been saying it for a long time, I will not hire an assistant coach until I've seen his wife. If she looks the part, and she's a D-1 recruit, then you got a chance to get hired. That's part of the deal. There's a very strong correlation between having the confidence, going up and talking to a woman, and being quick on your feet and having some personality and confidence and being fun and articulate, than it is walking into a high school and recruiting a kid and selling him."

On Thursday, the second-year head coach issued a mea culpa on Twitter.

Franklin later tweeted that his attempt at humor "fell a few yds short. Was speaking to the courage it takes 4 men 2 approach the women who become their wives!!!!!'' "I clearly used language that doesn't reflect my views on women and I am SORRY!'' he added.

The 40-year-old Franklin led the Commodores to the Liberty Bowl in his first season but the team lost six of eight conference games and finished with an overall 6-7 record. So he may want to consider recruiting assistants with better football acumen instead of checking out their better-halves.

Last year, Franklin made headlines by arriving via helicopter at high school games to scout players. One can only wonder if he was also scouting their coaches' wives.