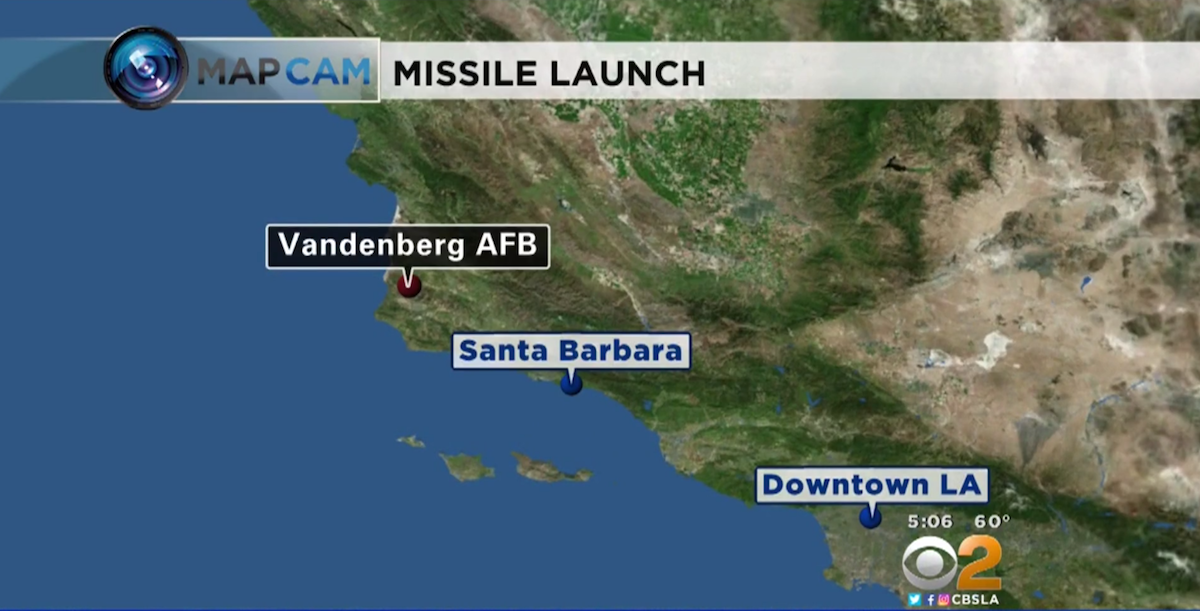 LOS ANGELES —  Vandenberg Air Force Base in Central California is preparing to launch a missile designed to shoot down an incoming warhead.

CBS Los Angeles reports a Ground-based Interceptor, which is scheduled to be launched between noon and 4 p.m. Tuesday, is part of a missile defense test, according to the Air Force base.

The goal of the unprecedented launch is to simulate a North Korean ICBM aimed at the U.S. homeland, officials said last week.

Vandenberg said the missile will attempt to fly over the Pacific Ocean and intercept some sort of "target object" being launched from the central Pacific Ocean.

While the launch can be seen from Los Angeles, enthusiasts likely will not be able to see when the missile and the target collide.

Tuesday's test is in response to a growing threat from North Korea, which recently launched its third missile test in three weeks.

The North's short-range ballistic missile traveled about 250 miles and splashed down in Japan's 'exclusive economic zone' – an area where commercial ships are known to operate.

One analyst believes the test was designed to simulate a strike on an American military base.

"It was apparently an operation for an attack on Iwakuni, which is a U.S. marine base in southwest Honshu island of Japan. This has become a routine accelerated launch schedule," said Patrick Cronin, senior advisor and senior director of the Asia-Pacific Security Program at the Center for a New American Security.

"In order to deter North Korea, we will take concrete action together with the United States," said Japanese Priminister Shinzo Abe.

Experts said Japan and the U.S. could work together on cyber and missile action against North Korea, which could include shooting down North Korea's future test missiles.

Kim Jong Un has ordered an investigation into the sabotaging of his missile systems, and he is reportedly looking for spies inside his regime.