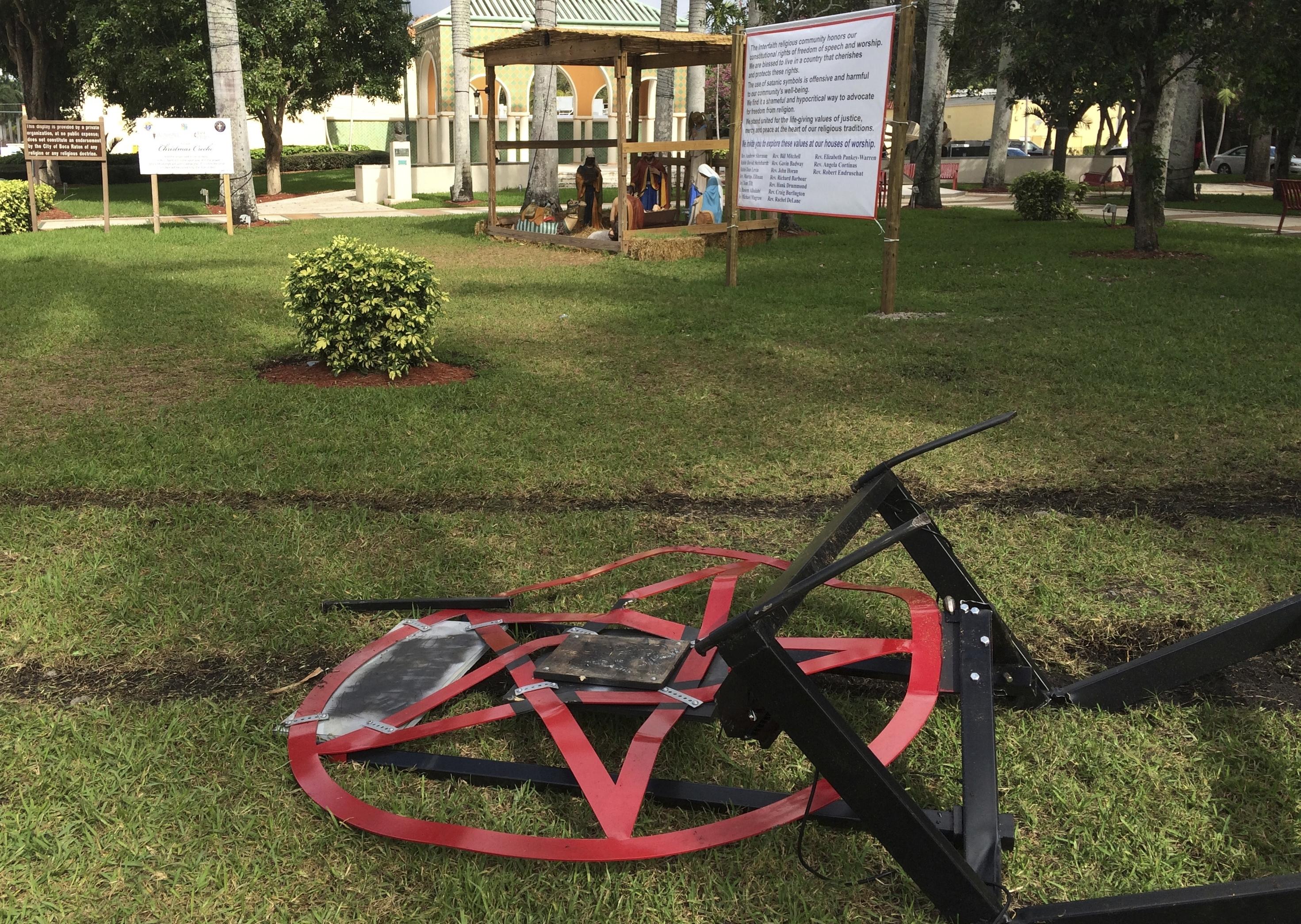 BOCA RATON, Fla. -- A 300-pound metal sculpture of a satanic pentagram, erected as an atheist protest to a public park’s Nativity scene, was severely damaged on Tuesday when it was pulled to the ground by vandals.

It appeared vandals had attached a chain from a vehicle to the sculpture and yanked it down, dragging it several feet. As local television reporters prepared live broadcasts, two passersby stopped and pushed the sculpture back onto its base before walking away.

The sculpture sits about 20 feet from a traditional Nativity scene of Mary, Joseph and the baby Jesus, and is backed by a banner from an atheist group reading “Keep Saturn in Saturnalias,” a reference to the belief that the early Christian church substituted Christmas for a Roman pagan holiday.

It is the latest Florida protest against manger scenes on public property, mirroring earlier battles inside the state capitol in Tallahassee.

Boca Raton police officer Sandra Boonenberg said the overnight strike was the third attack on Smith’s sculpture and its explanatory banner since he erected the display earlier this month. Someone painted the once-red sculpture black on Monday. Earlier, someone damaged the banner. Detectives are investigating.

Smith, a middle school English teacher, said that as an atheist, he does not believe in God nor Satan, but is using a symbol often associated with devil worship to highlight his belief that religious displays have no place on public property, because they make non-believers “feel like second-class citizens.”

“We are here to call out Christian hypocrisy and theistic bias in taxpayer-funded public arenas while advocating for the separation of church and state,” he told The Associated Press Monday night, before the latest act of vandalism. “Our ultimate goal is to return the government to its viewpoint neutral stance so that when an atheist takes a stroll through the park we aren’t assaulted by Bronze Age mythology.”

He could not be immediately reached Tuesday, but called the earlier acts of vandalism “examples of mob mentality toward minority faiths.”

The U.S. Supreme Court has ruled that government agencies can allow religious displays on public property, but if they do, they cannot discriminate. Both the Nativity scene and the Pentagram were installed with city permits.

A group of local religious leaders -- 14 ministers, two rabbis and the president of the local mosque -- placed a banner next to Smith’s sculpture criticizing its placement.

“The use of satanic symbols is offensive and harmful to our community’s well-being,” the banner reads. “We find it a shameful and hypocritical way to advocate for freedom from religion.”

The city issued a statement saying that while it respects Smith’s free-speech rights, it doesn’t support his message.

“In years past, the seasonal, religious displays in Sanborn Square have contained messages projecting the themes of peace, forgiveness and harmony,” it said. “This display appears to be more about shock value, attention and challenging our commitment to constitutionally protected free speech rather than promoting goodwill, respect and tolerance during the holiday season.”

Passerby Judy Hill, a retired information technology worker, decried the vandalism but didn’t think Smith should have erected his sculpture next to the Nativity scene.

“I know there is freedom of speech, but there is a time and place for everything,” said Hill, a Methodist. “He just wanted to get publicity and he got it.”

“It is a very precious season and for someone to come and almost make fun of that, to just really negate the time of year, it’s inappropriate,” she told CBS Miami.

In 2013 and 2014, atheists erected protest displays in the Florida capitol after a Christian group placed a manger there. Those displays included a Festivus pole made of beer cans, a depiction of the Flying Spaghetti Monster, a mock god popular among non-believers, and one showing an angel falling into flames with the message “Happy Holidays from the Satanic Temple.” The latter was damaged by a vandal.