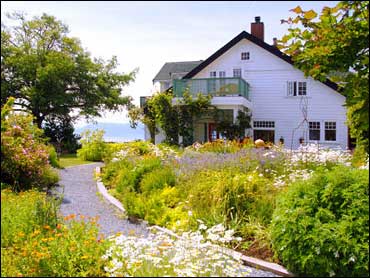 (Sooke Harbour House)
It snowed two inches last week as I watched from my room at the Sooke Harbour House, which is a lovely, art-filled inn on Vancouver Island's southern shore, near the city of Victoria. The Olympic Mountains of Washington state were snow-capped and rugged across the Strait of Juan de Fuca, and a sea otter jumped out of the water on the rocky beach below me to roll and play in the fresh snow.

It was an unseasonable dumping, and delayed the onset of the inn's lovely gardens and flowers. The vegetable and herb gardens that they use for the fine-dining restaurant had to be shielded from the snow by rounded, plexiglass covers. They say that it rarely snows here, and certainly not in March, but the weather is freaky everywhere these days. What else could I do? I filled the bathtub that sat in the middle of my suite, with a view out the window of water and mountain, and hunkered down with a book about Babe Ruth until the snow melted.

The headboard of my bed grew into a tree of peeled bark, with branches that went all the way up to the 12-foot ceiling. The elevator was painted all the way around in an underwater scene of swimming salmon and an octopus. Every wall of the place was covered in art, from paintings to gold-painted mirror frames with a jumble of attached objects. For dinner one night, I sat down with owners Sinclair and Frederique Philip and without a glance at a menu, seven courses rolled out over the next two and a half hours, from a dab of creamy cauliflower soup with a feta crouton to a scoop of house-made red bean and maple syrup ice-cream, all accompanied by lots of good conversation and British Columbia wines from Sinclair's extensive cellars.

"People in other parts of Canada don't know this island exists," said Sinclair at one point. "They call it Victoria Island." With hospitality and food and views like this, Vancouver Island in general and Sooke Harbour House in particular are two of those finds that make travel so deeply satisfying. Seeing it in the snow was a bit austere; now I have to go back when the place is in full, riotous bloom.