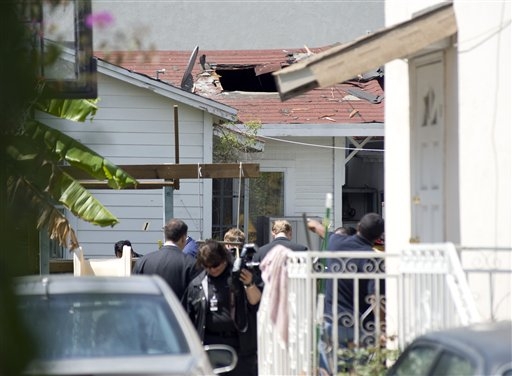 LOS ANGELES — Police are hunting a suspect in a blast outside a California synagogue and community center that was initially believed to be an industrial accident. Area Jewish organizations were urged to be extra vigilant.

Ron Hirsch, 60, a transient, was linked to items found in and around a hunk of concrete and large pipe that flew some 25 feet into the air after the Thursday explosion at Chabad House Lubavitch of Santa Monica, Santa Monica police Sgt. Jay Trisler said in a statement Friday.

"The device appeared to have been deliberately constructed," Trisler said. "Based on his suspected involvement in this incident, Hirsch is considered extremely dangerous," Trisler said.

Hirsch, who is known to spend time at synagogues and Jewish community centers seeking charity, is wanted on state charges of possession of a destructive device and unrelated local charges, Trisler said.

Authorities said they knew of no motive behind the explosion, and Jewish groups said they did not believe anti-Semitism was necessarily behind it.

On Friday afternoon, the Anti-Defamation League issued a security alert to synagogues and other Jewish organizations in the Los Angeles area.

The development was first reported by the Los Angeles Times.

Authorities initially believed a worker was trying to remove the pipe from concrete when a chemical mixture created pressure and launched the 4-foot-long pipe and plug of concrete into the air.

The explosion shattered windows, punched a hole in the synagogue, and sent the pipe ricocheting into a neighboring house where a young boy was sleeping. There were no injuries.

About 20 people had been attending a Passover service in the synagogue, and they and about 80 others from surrounding houses were evacuated for more than five hours.

The FBI and federal Bureau of Alcohol, Tobacco and Firearms have joined local agencies in the investigation.

"We have no evidence of any kind of threat to any Jewish institution or evidence that this was a hate crime," said Amanda Susskind, regional director of the ADL's Los Angeles region.

Susskind said the alert was "not intended to create undue alarm" but rather to keep people on the lookout for a man who seems to be disturbed.

The phone rang unanswered at the synagogue.