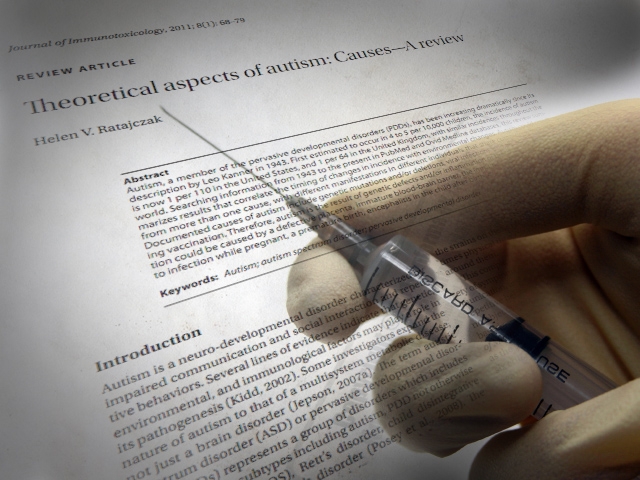 For all those who've declared the autism-vaccine debate over - a new scientific review begs to differ. It considers a host of peer-reviewed, published theories that show possible connections between vaccines and autism.

The article in the Journal of Immunotoxicology is entitled "Theoretical aspects of autism: Causes--A review." The author is Helen Ratajczak, surprisingly herself a former senior scientist at a pharmaceutical firm. Ratajczak did what nobody else apparently has bothered to do: she reviewed the body of published science since autism was first described in 1943. Not just one theory suggested by research such as the role of MMR shots, or the mercury preservative thimerosal; but all of them.

Ratajczak's article states, in part, that "Documented causes of autism include genetic mutations and/or deletions, viral infections, and encephalitis [brain damage] following vaccination [emphasis added]. Therefore, autism is the result of genetic defects and/or inflammation of the brain."

The article goes on to discuss many potential vaccine-related culprits, including the increasing number of vaccines given in a short period of time. "What I have published is highly concentrated on hypersensitivity, Ratajczak told us in an interview, "the body's immune system being thrown out of balance."

University of Pennsylvania's Dr. Brian Strom, who has served on Institute of Medicine panels advising the government on vaccine safety says the prevailing medical opinion is that vaccines are scientifically linked to encephalopathy (brain damage), but not scientifically linked to autism. As for Ratajczak's review, he told us he doesn't find it remarkable. "This is a review of theories. Science is based on facts. To draw conclusions on effects of an exposure on people, you need data on people. The data on people do not support that there is a relationship. As such, any speculation about an explanation for a (non-existing) relationship is irrelevant."

Ratajczak also looks at a factor that hasn't been widely discussed: human DNA contained in vaccines. That's right, human DNA. Ratajczak reports that about the same time vaccine makers took most thimerosal out of most vaccines (with the exception of flu shots which still widely contain thimerosal), they began making some vaccines using human tissue. Ratajczak says human tissue is currently used in 23 vaccines. She discusses the increase in autism incidences corresponding with the introduction of human DNA to MMR vaccine, and suggests the two could be linked. Ratajczak also says an additional increased spike in autism occurred in 1995 when chicken pox vaccine was grown in human fetal tissue.

Why could human DNA potentially cause brain damage? The way Ratajczak explained it to me: "Because it's human DNA and recipients are humans, there's homologous recombinaltion tiniker. That DNA is incorporated into the host DNA. Now it's changed, altered self and body kills it. Where is this most expressed? The neurons of the brain. Now you have body killing the brain cells and it's an ongoing inflammation. It doesn't stop, it continues through the life of that individual."

Dr. Strom said he was unaware that human DNA was contained in vaccines but told us, "It does not matter...Even if human DNA were then found in vaccines, it does not mean that they cause autism." Ratajczak agrees that nobody has proven DNA causes autism; but argues nobody has shown the opposite, and scientifically, the case is still open.

A number of independent scientists have said they've been subjected to orchestrated campaigns to discredit them when their research exposed vaccine safety issues, especially if it veered into the topic of autism. We asked Ratajczak how she came to research the controversial topic. She told us that for years while working in the pharmaceutical industry, she was restricted as to what she was allowed to publish. "I'm retired now," she told CBS News. "I can write what I want."

We wanted to see if the CDC wished to challenge Ratajczak's review, since many government officials and scientists have implied that theories linking vaccines to autism have been disproven, and Ratajczak states that research shows otherwise. CDC officials told us that "comprehensive review by CDC...would take quite a bit of time." In the meantime, CDC provided these links:

Overview of all CDC surveillance and epi work: http://www.cdc.gov/ncbddd/autism/research.html