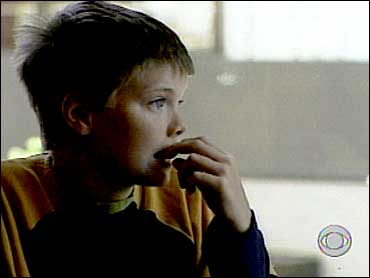 Because Alex Donnelly is autistic, he can't communicate normally or lead a normal life.

Yet he has some amazing abilities. When asked what the capital cities of Turkmenistan and Venezuela are, he can answer "Ashkerbad" and "Caracas" accurately.

His father claims Alex wasn't autistic - until he got certain vaccinations containing a mercury preservative.

As kids got more and more vaccines over the years, more mercury came with them - in amounts way over safety limits. The Center for Disease Control and Prevention has long claimed it's not the cause of

A half dozen childhood vaccines still have mercury,but the shots most kids get have little to none, so flu shots this fall are the biggest outstanding issue.

Does the amount in a flu shot matter? The theory is yes. In genetically susceptible children, even small amounts of mercury can damage the brain and the mercury buildup is cumulative in those children who lack the ability to shed it.

The flu shot is particularly important because babies will get it twice the first year and then continue getting it once a year thereafter. There are 25 micrograms of mercury in a single flu shot. Compare that to the current safe levels of mercury most kids get in their cumulative vaccinations in 2004 which is something like .4 micrograms all together over several years.

Nobody makes the claim that all ADD and autism cases are caused by the mercury in vaccines. But many researchers believe it plays a large role in our epidemic of the 1990's.

But now, a landmark study by Dr. Mady Hornig, from the Mailman School Of Public Health, Columbia University, is adding to the mercury worries, as Attkisson finds out.

Hornig injected a strain of mice with genetic tissues similar to those found in children with mercury-laden vaccines equivalent to what kids got in the 1990's. The mice developed profound brain problems.

So what types of behavior did Hornig see in the mice, and how does that compare with what we call autism? Dr. Hornig answers, "All sorts of strange behaviors that were repetitive in nature, where animals would just keep repeating the same behavior in a very stereotyped fashion."

Alex's father, Jim Donnelly, says it only confirms what he's believed all along: most kids aren't harmed by mercury in vaccines; they shed it naturally, but some retain it, and it poisons their brains.

Says Donnelly, "When (Alex's) testing came back, he had mercury levels that were 20 times the EPA safety margin residing in his body. It was unbelievable."

Other scientists and the CDC dispute such a link. But if it's true, hundreds of thousands of American kids could be living with the fallout. And the results could be devastating to vaccine makers and federal health officials who have steadfastly defended the use of mercury, a potent neurotoxin, in childhood vaccines.