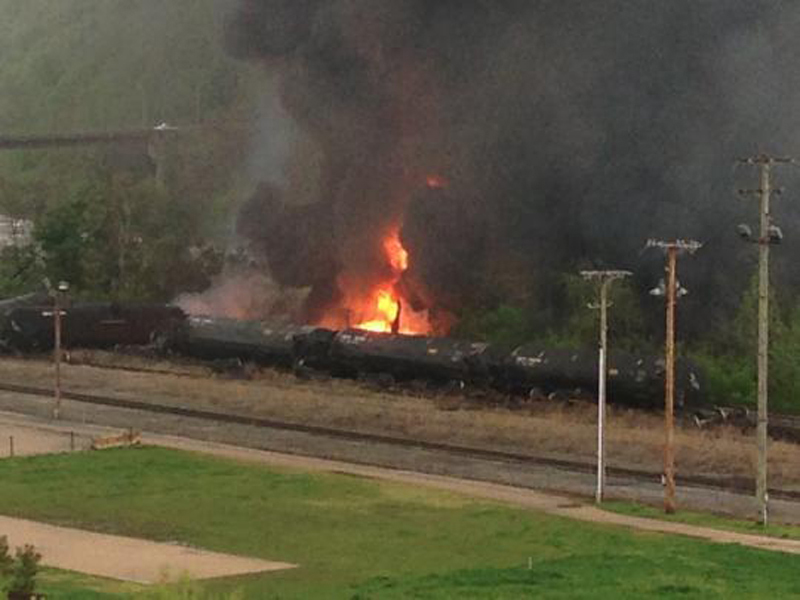 LYNCHBURG, Va. -- Several train cars carrying crude oil derailed and caught fire Wednesday along the James River in Virginia, with three black tankers ending up in the water and leaking some oil.

It is the most recent crash involving oil trains that has safety experts pushing for better oversight.

Nearby buildings were evacuated for a time, but officials said there were no injuries and the city on its website and Twitter said firefighters on the scene made the decision to let the fire burn out.

Three or four of the tankers were breached on the train that railroad company CSX said was on its way from Chicago to unspecified destination. Most of the cars were knocked off the tracks.

Photos and videos posted online showed large flames and thick, black smoke right after the crash. But in later photos it seemed the fire was mostly out.

Concern about the safety of oil trains was heightened last July when runaway oil train derailed and exploded in Lac-Megantic, Quebec, near the Maine border. Forty-seven people died and 30 buildings were incinerated. Canadian investigators said the combustibility of the 1.3 million gallons of light, sweet Bakken crude released in Lac-Megantic was comparable to gasoline.

"This is another national wake-up call," said Jim Hall, a former NTSB chairman said of the Lynchburg crash. "We have these oil trains moving all across the United States through communities and the growth and distribution of this has all occurred, unfortunately, while the federal regulators have been asleep."

"This is just an area in which the federal rulemaking process is too slow to protect the American people," he said.

There have been eight significant oil train accidents in the U.S. and Canada in the past year involving trains hauling crude oil, including several that resulted in spectacular fires, according to the safety board.

Lynchburg officials told CBS Roanoke, Va. affiliate WDBJ-TV one tanker was empty, and oter was full and a third about a-third full.

City spokeswoman JoAnn Martin said there's no impact to the water supply for Lynchburg's 77,000 residents because it only sources from the James in times of drought.

CSX said it is "responding fully, with emergency response personnel, safety and environmental experts, community support teams and other resources."

The National Transportation Safety Board said it is sending investigators to the scene, as is the Federal Railroad Administration.

Grady Cothen, a former Federal Railroad Administration official, said given the recent wet weather in Virginia and the accident's location near a river, it's possible that soft subsoil may have weakened the track, Cothen speculated.

Railroads "try to catch that before it gets out of hand," but aren't always successful, he said.

Gov. Terry McAuliffe said Deputy Secretary of Public Safety and Homeland Security Adam Thiel was dispatched to the site to provide officials with updates on the situation.

In one of her last acts before leaving office last week, outgoing National Transportation Safety Board Chairman Deborah Hersman warned the Obama administration that it needs to take steps immediately to protect the public from potentially catastrophic oil train accidents even if it means using emergency authority.

"We are very clear that this issue needs to be acted on very quickly," Hersman told reporters at the conclusion of a two-day forum the board held on the safety of rail transport of oil and ethanol.