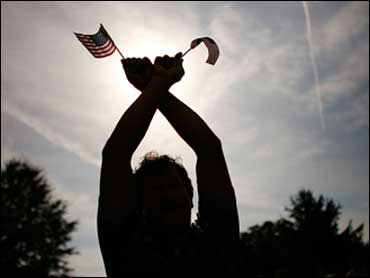 After 12 hours of meeting and hearing emotional testimony, Prince William County supervisors voted to move forward with their contentious measure to deny services to illegal immigrants.

They postponed the matter of how to secure long-term funding for the plan, which includes allowing police to check the residency status of anyone arrested in the county and improve cooperation with federal immigration authorities.

More than 1,200 people packed the county government complex in Woodbridge and the streets outside last night - and about 400 signed up to address the supervisors during the public comment period.

As the meeting began, supporters and opponents of the measures scuffled in the street before police separated them.

Supervisors were supposed to vote on the restrictions two weeks ago, but put off the vote while they studied the county's budget situation.

It calls for cuts to certain county services and prohibits undocumented residents from getting business licenses. The resolution also expands police authority allowing officers to ask people about their legal status.

Immigration supporters are concerned about the consequences of the police action and what will happen if people do not call police for help or to report a crime, WUSA reports.

Instead, the Virginia Crime Commission's immigration task force approved a proposal to give more money to local governments to house arrested illegal immigrants and to expand or build jails, the Post reported.

But the real drama was in Prince William, and it wasn't confined to the street. For hours yesterday afternoon and deep into the night, the podium belonged to residents, highlighting how visceral the issue has become. The list of speakers grew longer after the workday ended, as scores of Hispanic immigrants arrived to urge the supervisors to vote no, many speaking through translators, the Post reported. Children of immigrants, standing on stools, asked board members not to hurt their parents, according to the paper.

Others pointed out that illegal immigrants are breaking the law, the Post reports. "Where do you get off demanding services, rights and mandatory citizenship?" said Manassas resident Robert Stephens, addressing the large crowd of Hispanic residents, reported the Post. "Who invited you? You cry for your rights? You have none."

Police officials emphasize that they would not be conducting immigration sweeps or setting up checkpoints, as some have feared, and that it would take months to put the measures into practice. More than 500 county police officers would need to be trained in the nuances of federal immigration law. Yesterday's vote also approved the creation of a seven-officer Criminal Alien Unit that would work directly with federal immigration agents, the Post reported.

Legal experts say the county policies are untested in court. A group of 22 plaintiffs has filed a lawsuit against the county and its top officials in federal court seeking to block the measures, claiming that they violate equal protection laws and that immigration enforcement is a federal concern, the Post reported.