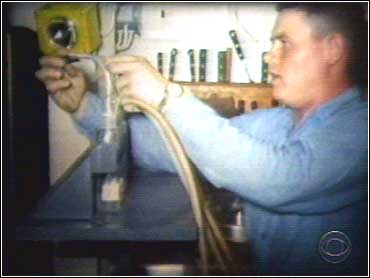 CBS News has learned that Department of Veterans Affairs hospitals have been instructed to evaluate some veterans for possible effects of biological and chemical warfare tests done on U.S. troops in the 1960s.

As CBS News first reported back in May, in two of those tests, code-named "Autumn Gold" and "Copper Head," more than a thousand U.S. sailors were sprayed with materials once thought to be harmless.

Many of those sailors—some of whom claim they were subjected to the test without their consent and were never told what it involved—feel their health has been damaged.

The directive, dated Dec. 1 from Veteran's Affairs under secretary for health, directs veterans hospital staff to "provide evaluations to eligible veteran who may have been exposed to chemical and/or biological agents."

It states that the veterans may have concerns "about the relationship of their participation to their current health."

But the directive also provides new details on the tests, including:

In September, the Pentagon agreed to turn over a list of the servicemembers who were involved in the tests as well as a list of all the tests and the biological and chemical agents used. The December directive said the Defense Dept. Was still compiling the list of personnel involved.

The agreement was the latest step in an apparent evolution of Pentagon policy. In 1996, Pentagon officials told the VA "they do not possess" any information about the tests. Two years later, they admitted having "15 bound volumes relating to Autumn Gold alone."

A letter from the Dept. of Veterans Affairs (VA) to the Pentagon, obtained through the Freedom of Information Act indicates the VA requested a lot more, including classified medical records. At last report, the two departments are currently negotiating over what will be released.

Veterans like Robert Bates, who has a variety of health problems, have repeatedly tried to get information about the experiments with no success.

Autumn Gold took place off Hawaii in 1963. Copper Head was a similar operation off Newfoundland.

According to a Pentagon briefing film about the tests, the goal was to test the vulnerability of Navy ships to germ warfare attack. Sailors were sprayed with BG, a bacteria considered harmless by the military that is used to simulate the deadly anthrax germ, and then with zinc cadmium sulfide.

Zinc cadmium sulfide compound was thought to be safe, but the military later stopped outdoor spaying. Cadmium compounds are now known to be carcinogenic to humans.

In large doses, BG can also be harmful: in rare cases, it has caused pneumonia, allergic reactions, nausea and vomiting. In 1988, an Army biologist recommended BG spraying "be discontinued" because the claim it "is not dangerous" is "patently erroneous."

In documents previously obtained by CBS News, sailors on the "target ships" in the tests are called "test subjects." Only eight men wore gas masks. They were the "control group" in this experiment.

Other crewmen were ordered to give throat swabs or gargle samples.

In a written statement the Pentagon replied in May that the sailors "were not exposed to any harmful chemical and biological compound" and they all "were fully informed about the details of each test."

Dozens of sailors interviewed dispute that.

Medical corpsmen on vessels involved in one of the tests say and ships' logs indicate an upsurge in upper respiratory tract infections after the test and some cases of nausea, possibly a reaction to BG.