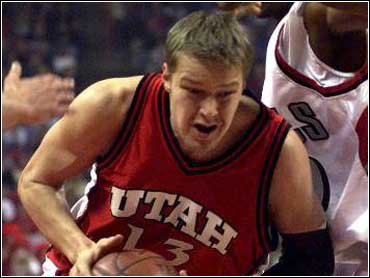 The outlook for Utah forward Hanno Mottola was dim Tuesday.

Same for the spirits of coach Rick Majerus.

Mottola, one of college basketball's top forwards, is out indefinitely with sprains to his left elbow and right thumb. Majerus was awaiting test results to learn whether the injuries are more severe.

"A doctor is going to look at him today and tomorrow," Majerus said Tuesday. "He's out. How long, I can't even say."

The concern is that a ligament might be torn in Mottola's thumb or there could be a hairline break in his elbow. One or both of the injuries might need surgery.

"The thumb injury is bothering me more than the elbow," Mottola said.

If surgery is required, Mottola's season would be over. There's a possibility he could return through rehabilitation but Majerus said that would take several weeks.

"If that's case, he will be back later rather than sooner," Majerus said.

Mottola is a 6-foot-9 senior forward from Helsinki, Finland, and an NBA prospect. He won't play Thursday when No. 21 Utah meets San Diego State and he's likely to miss Saturday's game against BYU.

Mottola was injured during No. 21 Utah's victory at Air Force on Jan. 29. He hurt the thumb in the first half and injured the elbow on a hard fall in the second half.

Mottola finished the Air Force game, then played in a victory over New Mexico and a loss at UNLV last week. However, he shot a combined 28 percent (7-of-25) in his last two games.

Against UNLV, Mottola played 37 minutes and shot 5-of-16 with six turnovers, five in the first half.

Before the Air Force game, Mottola had averaged 19.3 points a game in 10 starts. He missed Utah's first eight games with a torn ligament in his left knee. That injury, suffered in November, didn't require surgery.