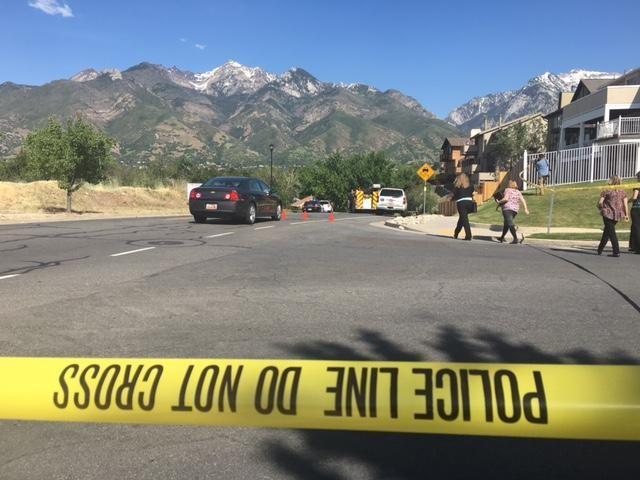 SANDY, Utah -- A man opened fire on a woman and children inside a car in the street of a Salt Lake City suburb Tuesday afternoon, leaving the woman, a boy and the man dead and two other children injured, police said.

The shooting outside a home in a middle-class neighborhood in Sandy was reported to police as a domestic dispute, said Police Sgt. Jason Nielsen. Officers were still trying to confirm details about the relationships of those involved.

Nielsen did not immediately know if the man believed to be attacking the woman and children killed himself or if someone else involved in the dispute had a gun.

The public is no longer in danger, CBS affiliate KUTV reports.

Police did not know what led to the dispute but Nielsen said a passerby picked up a woman and two juveniles in a car.

The suspected shooter rammed his car into the other vehicle and then got out of his car and started firing.

Police found the man, a woman and a boy dead, and a boy and girl injured. Nielsen did not have details about their ages or identities or the passerby's name or whereabouts.

Nielsen did not know the kids' relationships to the adults and it wasn't immediately clear if the boy and girl had gunshot wounds or injuries from the car crash.

Ridge Workman, a 14-year-old boy who lives several hundred yards away from the shooting, said he heard seven to eight gunshots but mistook them for fireworks. Workman said he saw a car in the street riddled with bullet holes. Its windows were smashed in and there was a lot of blood nearby, according to Workman.

Resident Colby Corbett was in his backyard waiting for his 8-year-old son to walk home from school when he heard 20 to 30 gunshots within a few seconds.

"I was panicking bad," Corbett said. "I thought it was like a gun battle."

Corbett said he was relieved when his son arrived soon after, coming from the school and in the opposite direction of the gunfire. His son, Anthony, said he wasn't worried because he thought the gunshots were fireworks.

The shooting occurred in the quiet neighborhood with winding roads, nestled against mountains about 20 miles southeast of Salt Lake City.

It's about half a mile from an elementary school, but it was unclear if any children still at the school witnessed the shooting or heard gunshots, Canyons School District spokesman Jeff Haney said.

School had let out for the afternoon but some students were still on the playground or talking outside with teachers when school officials were notified that the shooting had happened and the students and staff were hustled inside for a lockdown, Haney said.

He said some parents arriving to pick up children realized what was happening and scooped up kids into their cars or ushered them into nearby homes.

Parents and kids were being reunited Tuesday evening at the school, where the lockdown was lifted after about an hour.

Teacher Janae Hunt said only a handful of kids were in the school when the lockdown was imposed and she didn't hear or see anything.