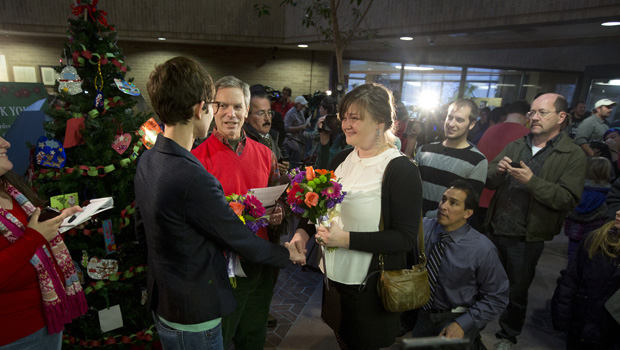 WASHINGTON - Utah on Tuesday took its fight against same-sex marriage to the U.S. Supreme Court, asking Justice Sonia Sotomayor to suspend a lower court ruling that allowed same-sex weddings to go ahead in the heavily Mormon state.

Sotomayor, who handles emergency legal applications from Utah and surrounding states, asked the plaintiffs in the case, three gay and lesbian couples, to respond to the application by 12 p.m. EST on Friday.

Utah is seeking to block a judge's decision to strike down the state's 2004 ban on same-sex marriage on grounds it violates the rights of same-sex couples to equal treatment under the law.

Hundreds of gay couples in Utah have received marriage licenses since the December 20 ruling by U.S. District Judge Robert Shelby.

Utah's court filing says that the gay and lesbian marriages that have been performed in the state are "an affront ... to the interests of the state and its citizens in being able to define marriage through ordinary democratic channels."

Sotomayor can reject the application outright or refer the case to the entire court. If she rejects the application, the state could ask another of the justices to act. There is no set time by which Sotomayor is required to act.

Utah became the 18th state to extend marriage rights to gays and lesbians when Shelby sided with three same-sex couples in their lawsuit challenging a voter-passed amendment to the Utah state constitution that defined marriage as exclusively between a man and a woman.

The decision came as a shock to many of Utah's 2.8 million residents, nearly two-thirds of whom are members of The Church of Jesus Christ of Latter-day Saints. The Church's doctrine states that sexual relations outside opposite-sex marriage are contrary to the will of God.

Utah's stay request on the ruling follows six months after the Supreme Court Justices issued two high-profile decisions on same-sex marriage, one of which struck down the Defense of Marriage Act (DOMA), a federal law that denied federal benefits to legally married same-sex couples.

Shelby already declined to stay his ruling pending appeal, meaning gay and lesbian couples were able to marry in the state immediately. The Denver-based 10th U.S. Circuit Court of Appeals also declined to stay the ruling, leaving the U.S. Supreme Court as the state's last recourse.

The stay application, if granted, would block same-sex marriage while the state appeals Shelby's decision. If the court grants a stay, the justices would not tackle the merits of the case at this stage.

Utah's stay application relies in part on the high court's June decision in United States v. Windsor, which, although it struck down DOMA, also said the definition of marriage is an issue that was largely a matter of state law.

In the Windsor case, in which the court was split 5-4, Justice Anthony Kennedy wrote for the majority that the federal law violated the U.S. Constitution's guarantee of equal protection.

"The federal statute is invalid, for no legitimate purpose overcomes the purpose and effect to disparage and to injure those whom the state, by its marriage laws, sought to protect in personhood and dignity," Kennedy wrote.

The law imposed "a stigma upon all who enter into same-sex marriages made lawful by the unquestioned authority of the states," he said

The scope and meaning of the Windsor ruling is a key issue in the Utah case. While Utah focuses on Kennedy's language about the federal law being an imposition on the right of states to regulate marriage, Judge Shelby also cited the case in his ruling.

He quoted a dissenting opinion by Justice Antonin Scalia, who wrote that the decision would make it easier for judges to strike down same-sex marriage bans due to the majority's finding that the federal law was motivated by a desire to harm same-sex couples.

"How easy it is, indeed how inevitable, to reach the same conclusion with regard to state laws denying same-sex couples marriage status," Scalia wrote. Shelby said he agreed with Scalia that the states-rights arguments "were insufficient to save a state-law prohibition that denies the plaintiffs their rights to due process under the law."