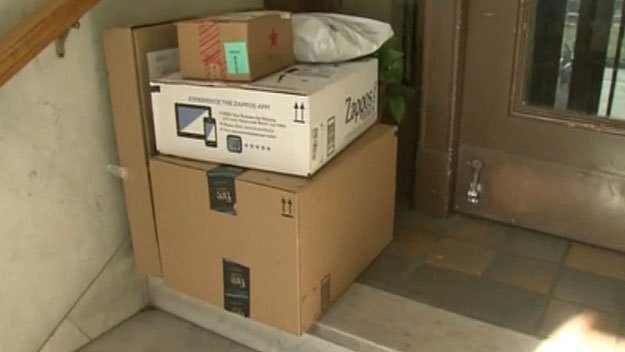 SOUTH JORDAN, Utah -- A man in one Utah community says his neighbors have begun placing decoy packages on front porches in an effort to thwart holiday delivery thieves.

Rocks, old clothes and junk televisions are among items that resident Kroger Menzer says residents in the Daybreak neighborhood of South Jordan have been putting in shipping boxes. People are also using surveillance video.

"The goal isn't to catch them in the act, that's for the police," Menzer told KSL-TV. The goal is to make it confusing and frustrating. So they come and steal a box, and they get home and it's a bunch of rocks, there's a good chance that they're probably not going to come back to steal another box."

Menzer said one of his neighbors came up with the idea and posted it to the Daybreak community Facebook page.

"This is a very tight-knit community," said Menzer, a real estate agent. "Even though there are 4,000 homes and 15,000 people living here, we all get to know each other pretty well."

Lt. John Barker, of the Unified Police Department, said it can take just seconds for a thief to jump out of a car, grab a package and run.

He said police don't want residents putting themselves in danger by confronting thieves. They recommend using surveillance video instead.

"If it's a good system, they can get some very good pictures," Barker said. "If you can get the car, and especially the license plate, that's very helpful in tracking these individuals down."