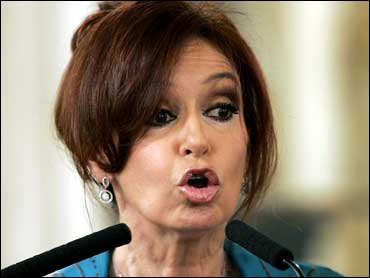 Argentina's new president reacted furiously Thursday to accusations by U.S. prosecutors that an intercepted suitcase full of cash from Venezuela was meant to finance her election campaign, calling the charge "garbage in international politics."

Aides to President Cristina Fernandez accused Washington of using a "vile trick" to smear her government for its close ties to Venezuela's leftist leader, Hugo Chavez, who is campaigning to reduce U.S. influence in Latin America.

Fernandez, one of only two female heads of state in Latin America, suggested the charges might have been directed at her in part because of her gender.

"This president may be a woman, but she's not going to allow herself to be pressured," Fernandez said, glaring at the cameras. She denounced the U.S. criminal complaint, but did not address the substance of the charges - that foreigners secretly tried to fund her campaign.

Instead, she signaled she intended to draw even closer to Chavez, vowing to "continue affirming our relation of friendship with all Latin American countries and also with the Bolivarian Republic of Venezuela."

Chavez also didn't mention the accusations in a speech Thursday, but praised Fernandez as a "lightning bolt."

The charges of a clandestine attempt to contribute nearly $800,000 in August put both the Argentine and Venezuelan governments on the defensive as opponents sought to turn the case into a political liability.

Fernandez appeared taken off guard by the charge that surfaced just two days after her inauguration. Her opponents demanded that Argentine authorities take testimony from four men charged in Miami with orchestrating a cover-up with top Venezuelan officials after the undeclared cash was seized by Argentine customs.

It's not against Argentine law for foreigners to contribute to a presidential campaign, but it is illegal to do so secretly. It also is illegal to bring undeclared cash into the country.

In a Florida court Wednesday, U.S. prosecutors accused the men of being illegal agents of a foreign government and said recorded conversations indicated the scheme reached the highest levels of the Venezuelan government.

(AP Photo)
The Venezuelan-American businessman who carried the suitcase, Guido Alejandro Antonini Wilson, seen at left, is not charged and appears to be a key witness in the case. He is named in an extradition request by Argentina, where he is wanted on fraud charges.

Fernandez's husband, then-President Nestor Kirchner, said in August that his government had "nothing to do" with the cash suitcase episode.

Interior Minister Florencio Randazzo, meanwhile, said Antonini should be extradited. "It now seems the U.S. justice system wants to protect the one who in reality they should extradite," he said.

Venezuelan Information Minister Willian Lara denied any link between the money and Chavez's government, saying the four men are not its agents and calling the charges "U.S. propagandistic trash." Lara told The Associated Press that the U.S. is trying to link Venezuela to the case "pulling by the hair."

State Department spokesman Sean McCormack denied any political motives: "This is not an issue of U.S.-Argentine relations. This is a matter of U.S. law enforcement enforcing U.S. laws."

But McCormack also lashed out at Chavez for doing what the charges suggest.

"We have talked about their interference in the affairs of other countries. They have tried to insert themselves into various elections throughout the region and in several cases it has backfired," he said.

The money seizure led to the firing of an Argentine official for letting Antonini carry the cash aboard a chartered flight with Argentine officials and employees of Venezuela's state oil company, Petroleos de Venezuela SA. PDVSA's top manager in Argentina also stepped down.

The scandal offers a glimpse into the sort of shadowy transactions that have long haunted Latin American governments. Its colorful cast of characters includes members of a new Venezuelan elite that has grown wealthy during Chavez's "Bolivarian Revolution" - a class dubbed the "Boli-bourgeoisie" by his critics.

Some of the suspects in Miami have prospered doing business with Venezuela's state oil company, which bankrolls Chavez's government. According to the U.S. criminal complaint, suspect Franklin Duran identified the person who carried the cash aboard the plane as an assistant to PDVSA's chief executive.

Both Duran and another Venezuelan suspect, Carlos Kauffmann, are shareholders in the Venezuelan petrochemical company Venoco and have done business with PDVSA. Kauffmann also has a stake in Perforaciones Alborz CA, which has supplied drills to PDVSA.

Both men have personal and professional ties to Antonini, who carried the suitcase.

The three competed together in the Gumball 3000 road rally in Europe and last year raced two Porsches representing the Venoco team, teammate and investment broker Antonio Pardo told AP. A red Ferrari used by Antonini's team in another race bore a sticker with a logo used by Chavez's government.

An attorney for Duran and Kauffmann said his clients are innocent.

Duran, who is listed in Venezuela as owner of the arms importer Ruibal y Duran, was investigated by Venezuelan lawmakers in 2003 for allegedly importing 115 Uzis without permission for police in the state of Cojedes. That investigation was set aside without finding wrongdoing.