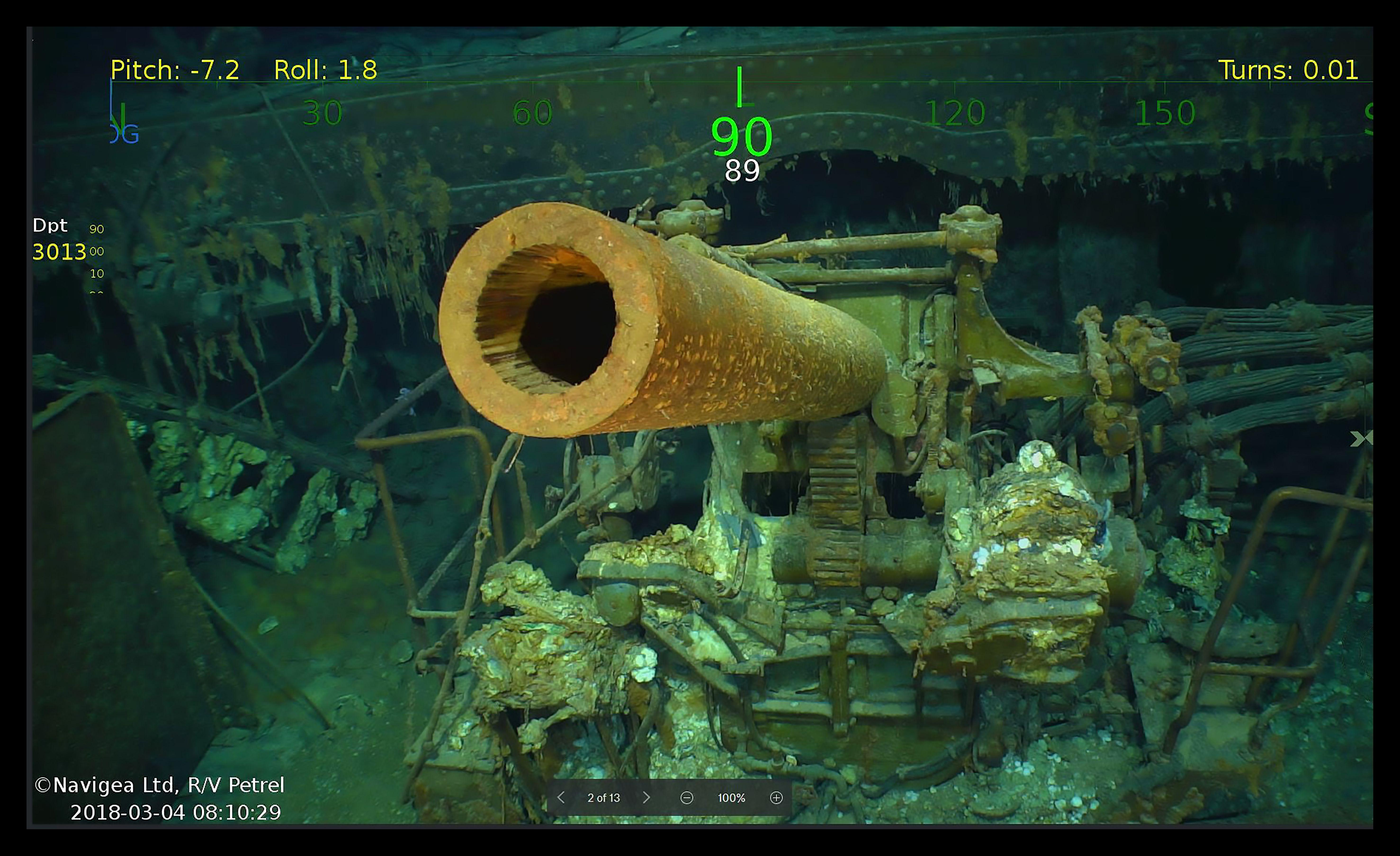 BANGKOK -- A piece of prized World War II U.S. naval history, the wreckage of the aircraft carrier USS Lexington, which was sunk by the Japanese in a crucial sea battle, has been discovered by an expedition funded by Microsoft co-founder Paul Allen. The expedition team announced that the wreckage of the Lexington, crippled by the enemy and then scuttled on May 8, 1942, in the Battle of the Coral Sea, was found Sunday on the seabed in waters about 2 miles deep, more than 500 miles off Australia's east coast.

"To pay tribute to the USS Lexington and the brave men that served on her is an honor," Allen said on his web page. "As Americans, all of us owe a debt of gratitude to everyone who served and who continue to serve our country for their courage, persistence and sacrifice."

The battle helped stop a Japanese advance that could have cut off Australia and New Guinea from Allied sea supply routes and crippled two Japanese carriers, leading to a more conclusive U.S. victory at sea a month later at the Battle of Midway.

The sea battle is also famous for being the first in which the opposing ships did not come in sight of each other, carrying out their attacks with carrier-launched aircraft.

Allen's teams have made several previous important shipwreck discoveries, including three other U.S. Navy vessels, an Italian destroyer, and the Japanese battleship Musashi.

The ship that found the Lexington, the Research Vessel Petral, has equipment capable of diving to 6,000 meters (about three and a half miles). It was deployed in early 2017 in the Philippine Sea before moving to the Coral Sea off the Australian Coast.

The Lexington, which had been affectionately dubbed "Lady Lex," was badly damaged by bombs and torpedoes, but the order to abandon ship was given only after a secondary explosion set off an uncontrollable fire. Some 216 crew members lost their lives, but 2,770 others were safely evacuated before its sister ship, the destroyer USS Phelps, fired torpedoes to send it to the bottom of the ocean. Allen said on his Twitter account that the ship went down with 35 planes, 11 of which had been found so far by his expedition.

Allen has said he undertakes such ventures in part to honor his father, who served in World War II, by finding and preserving the artifacts of that conflict.

News of the discovery evoked another father-son relationship, as the current commander of the U.S. Pacific Fleet offered his congratulations on Twitter.

"As the son of a survivor of the USS Lexington, I offer my congratulations to PaulGAllen and the expedition crew of Research Vessel (R/V) Petrel for locating the 'Lady Lex,' sunk nearly 76 years ago at the Battle of the Coral Sea," Adm. Harry B. Harris Jr. said. "We honor the valor and sacrifice of the Lady Lex's Sailors - all those Americans who fought in #WorldWarII - by continuing to secure the freedoms they won for all of us."

Harris linked the history to current U.S. interests in the Pacific, where China in recent years has begun to challenge traditional American naval hegemony, aggressively staking maritime territorial claims in waters also claimed by other nations, including Japan, Vietnam and the Philippines. U.S. Navy aircraft carriers are strong symbols of America's force projection, and one this week is making a friendly visit to Vietnam, the first since the Vietnam War ended more than four decades ago with a Communist victory.

"Alongside our allies, friends and partners, bound together by shared values, the United States is committed to maintaining a free and open Indo-Pacific, which has brought security and economic prosperity to all who live in this critical region," said Harris, currently visiting Australia.