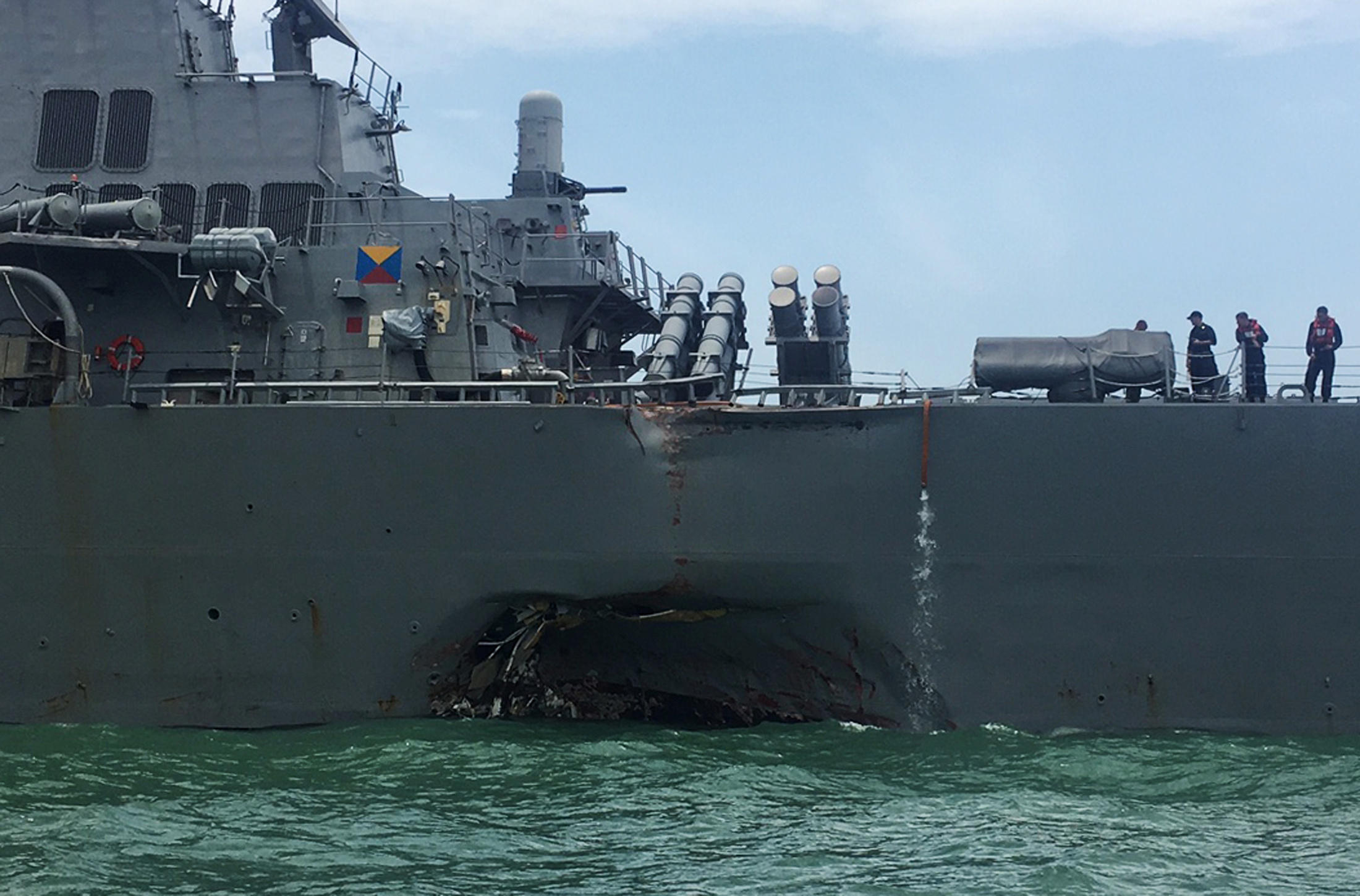 BEIJING -- The U.S. Navy said 10 sailors were still missing on Monday morning and five were injured after the USS John S. McCain warship collided with a merchant ship off the coast of Singapore.

The collision caused extensive damage to the U.S. ship's hull, which resulted in flooding in several compartments, including the crew's sleeping quarters. A search and rescue mission was underway for the missing sailors.

Following the incident, President Trump tweeted that his "thoughts and prayers are with our U.S. Navy sailors aboard" the U.S. warship.

CBS News correspondent Ben Tracy reports that the McCain docked in Singapore on Monday morning, arriving on its own power, as investigators worked to determine the cause of the crash.

The McCain has a crew of more than 300 sailors and officers. It was heading to Singapore for what the Navy said was a routine port visit when the collision happened.

Video shot during the search and rescue operation shows a large hole in the rear port (left) side of the American ship. It extends below the water line, which caused parts of the guided missile destroyer to flood. Defense publication Jane's said the hole appeared to be at least 10-feet in diameter.

The collision happened east of Singapore and the Straight of Malacca -- one of the busiest shipping lanes in the world. The warship collided with a 30,000-ton oil and chemical tanker more than three times its size.

Retired Navy Captain Kevin Eyer told CBS News that ships like the tanker do have radar, and "other sophisticated systems which they can use to identify ships around them. But beyond a certain point, you have dozens of ships within, perhaps, a five-square-mile box, all milling about."

The search and rescue operation involves ships and aircraft from the U.S., Malaysia and Singapore.

At least four U.S. sailors were evacuated by helicopter to a nearby hospital and are expected to survive.

This is the second collision involving a U.S. Navy ship in the Pacific in just the past two months. Seven sailors died in June when the USS Fitzgerald and a container ship hit each other off the coast of Japan.

The captain of the Fitzgerald was relieved of his command and several other sailors are being punished for poor seamanship.

"My personal opinion is that it's coincidental that these things happen," Eyer told CBS News. "The crews, the officers, the commanding officer, are all extremely well trained… this is the cost of having one of the world's largest, most complex and sophisticated navies operating at sea 24/7 around the world."

The USS McCain is named after Senator John Mcain's grandfather and father, both of whom were Navy admirals.

The Arizona senator tweeted that he is keeping the sailors in the ship in his prayers, and that he appreciates the work of the search and rescue crews.