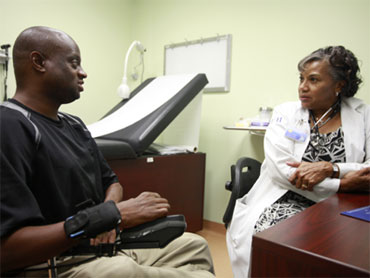 He is testing whether inner-city diabetics, an especially hard-to-treat group, might better control their blood sugar - and thus save a government health program dollars - by tracking their disease using Internet-connected cell phones, provided with reduced monthly rates as long as they regularly comply.

Consider Tyrone Harvey, 43, who learned he had diabetes seven years ago only after getting so sick he was hospitalized for a week, and who has struggled to lower his blood sugar ever since. In May, through a study Katz began with Howard University Hospital's diabetes clinic, Harvey received a Web-based personal health record that he clicks onto using his cell phone, to record his daily blood sugar measurements.

If Harvey enters a reading higher or lower than pre-set danger thresholds, a text message automatically pings a warning, telling him what to do. And at checkups, doctors will use the personal health record, created by Indiana-based NoMoreClipboard.com, to track all his fluctations and decide what next steps to advise.

"Hopefully you're paying more attention to your numbers, too," says Howard's Dr. Gail Nunlee-Bland, whose clinic uses an electronic health record - your official medical history - that can automatically link to NoMoreClipboard's consumer version and update it with things like medication changes.

The trend is called mobile health or, to use tech-speak, mHealth. If you're a savvy smartphone user, you've probably seen lots of apps that claim to help your health or fitness goals - using your phone like a pedometer or an alarm clock to signal when it is time to take your medicine.

Katz and other researchers are going a step further, scientifically testing whether more personalized cell phone-based programs can link patients' own care with their doctors' disease-management efforts in ways that might provide lasting health improvement.

"Mobile phones provide that opportunity for persons to get the feedback they need when they need it," explains Charlene Quinn, an assistant professor at the University of Maryland medical school, who is testing a competing cell phone diabetes system from Baltimore-based Welldoc Inc.

After all, most of the U.S. population now carries a cell phone. Accessing the Internet with them is on the rise, too - nearly 40 percent of cell callers do, the Pew Internet & American Life Project reported last week - allowing more sophisticated digital health contact.

On the other hand, older adults are less likely to use smartphones. So are people who are sicker, with multiple chronic diseases, says Dr. Joseph Kvedar, director of the Center for Connected Health, a division of Boston's Partners Healthcare.

Kvedar notes that nearly any phone can handle simpler text-messaging programs. Among the biggest offered to date is the free text4baby, where government-vetted health tips timed to pregnant women's due dates are texted weekly to about 50,000 participants so far.

Do these kinds of technologies work? There's some short-term evidence, although no one knows if people stick with it once the novelty wears off:

-In a study of 70 Boston residents to improve cancer-preventing use of sunscreen, Kvedar found daily texts with reminders hooked to the weather forecast for six weeks increased sunscreen use by 40 percent.

-The University of California, San Diego, went a step further, designing a text-message program to encourage weight loss where participants texted back answers to such questions as "Did you buy fresh raw vegetables to snack on this week?" Answering allowed more customized texted diet tips. In a pilot study of 75 people, text-message recipients lost about four more pounds in four months than those given printed dieting advice.

"What systems work best with patients has yet to be figured out," says George Washington's Katz, who is testing a version of that program, too - and worries not just about affordability when his study is over but whether interest will wane. "Otherwise, they find it's a nice toy to start with, and forget about it."