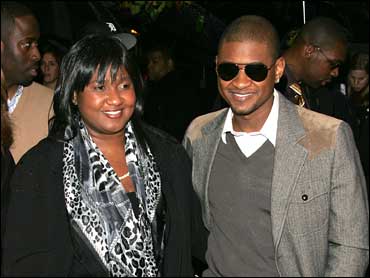 Usher's mother has been his manager since he was a teen, but now the superstar says he wants her to be just "mom."

The Grammy winner confirmed Monday that Jonnetta Patton is no longer in charge of his career, but denied the break was due to any rift.

"She and I are on great terms and support each other in our life's endeavors. We are both very happy but are now working in different areas of the business," he said in a statement to The Associated Press. "This is great for me because it means I now get to have my mother strictly as my mother with no added pressure."

Usher said he believed that by ending his professional relationship with his mother, it would bring them closer.

"At this time in my life, I am simply more interested in building the strength of my family. And in order to do that, I feel it's best to separate my business life from my personal life," he said.

This is the second major change this year for Usher, 28. In March, he announced his engagement to his longtime girlfriend, stylist Tameka Foster.

Rumors have swirled that Foster would replace Patton as Usher's manager, but the singer said: "She has no aspirations of becoming my manager or any other artist's manager."

Usher is slated to release the follow-up to 2004's "Confessions," which sold 9 million copies in the United States, later this year.

Netflix's password sharing crackdown could come by the end of March
Thanks for reading CBS NEWS.
Create your free account or log in
for more features.
View CBS News In
CBS News App Open
Chrome Safari Continue
Be the first to know
Get browser notifications for breaking news, live events, and exclusive reporting.