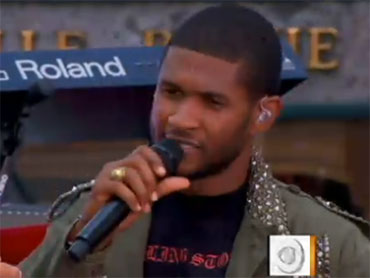 Five-time Grammy winner Usher has sold over 45 million records worldwide since he released his self-titled debut album in 1994 at the age of 14.

The superstar performed some of his new and classic songs, including, "Yeah," "DJ Got Us Fallin' In Love" and "There Goes My Baby," in our "Early Summer Concert Series" Friday.

Usher, still pumped up by the crowd, said when he's on stage he feels "the ultimate sense of connection" with his fans.

He told the crowd gathered on the plaza, "I do this music to make sure you guys enjoy it, make sure you guys love it. Which is why I decided to do it once again. Even though we released an album earlier this year, I wanted to do something special for my fans. Because I felt like I didn't get a chance to say everything to you. But when I'm connected right here, this is the best moment -- other than with my children -- these are the best moments I ever have. Thank you, guys, so much."

He explained, "It's incredible to, you know, to create a record because you know the fans are going to love it, but you really want to get back to the stage. This is the moment -- these are the moments that last forever. I mean, you can't buy this."

As for working in the studio, Usher said he has had songs he's held on to because he's had a personal connection to them.

"Those records are, you know, kind of like your personal favorites," he said. "Like you don't want to let it go even though everybody's like, 'Fine, it's your album, you can have what you want,' but, yeah, everything might not necessarily connect. But there's a deeper story. I mean, if you guys really listen to the lyrics, you pay attention to the notes that go into the artwork ... Listen, the lyrics, there's so many crazy messages inside the lyrics that not only speak to where I was at the moment, but also may help you through your moment."

Last year, Usher earned the distinction of being Billboard's "Top Hot 100 Artist of the Decade" and earlier this year he released his sixth album Raymond vs. Raymond.

For more with Usher, click on the video below.