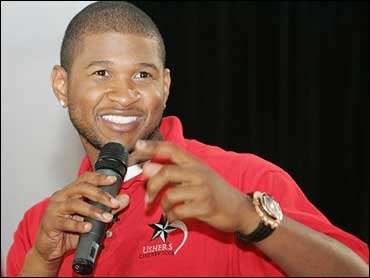 Usher, who began singing at age 6, has opened a summer camp to help some other prodigies-in-training.

Usher Raymond, the 26-year-old R&B star, dropped by for the first day of Camp New Look, an Atlanta program he recently started for minority youth in his home city. 150 campers aged 8 to 18 hole up at Clark Atlanta University for two weeks, honoring their specialties — either singing, dancing, or basketball — and learning about the respective industries.

"This is truly about learning the business side," Usher said Monday. "You're not going to learn it all overnight, but maybe, just maybe, you'll learn enough to change your life."

The children also sit in on panels and discussion sessions with agents, managers and sports executives to learn the financial side of entertainment and sports. Guest teachers will include Denver Nuggets forward Carmelo Anthony and Atlanta Falcons cornerback DeAngelo Hall.

Their lessons will be put to the test July 23, when they are expected to coordinate a charity celebrity basketball game and headline the halftime show.

The camp, Usher said, will be the first of many summers where kids are pushed to aim higher than just playing for a basketball team, but owning one. The singer is co-owner of the NBA's Cleveland Cavaliers.

Usher also asked the kids and counselors to treat him like a family member — albeit one with a burly bodyguard and a camera crew for an unnamed TV project following his every move.