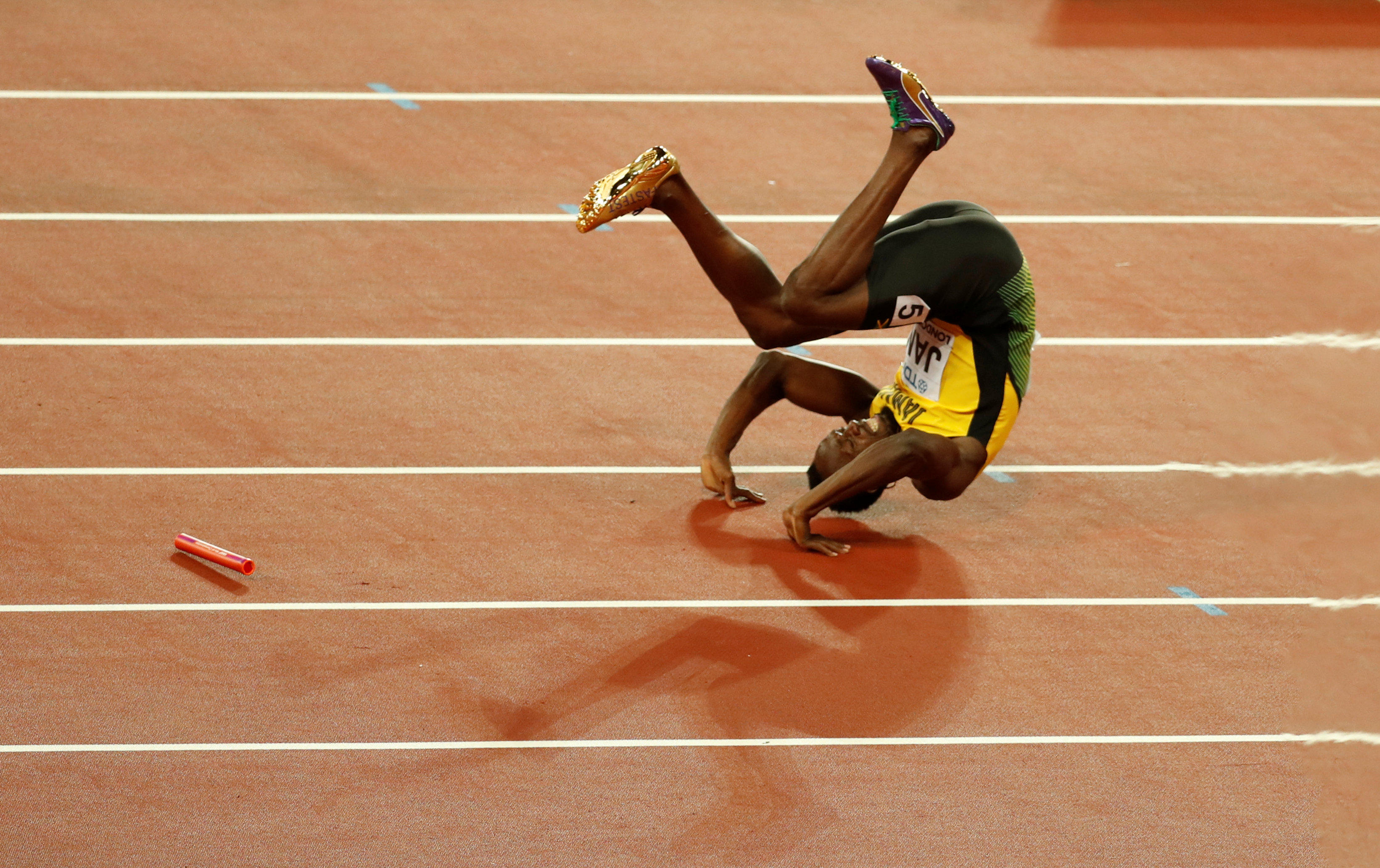 The Jamaican great crumpled to the track with a left-leg injury as he was chasing a final gold medal for the Jamaican 4x100-meter relay team on Saturday at the world championships.

Having to make up lots of ground on the anchor leg, Bolt suddenly screamed, stumbled and somersaulted as he came down, his golden farewell shattered by the first injury he has experienced at a major competition. He was helped to the finish line by his Team Jamaica teammates, CBS Sports reports.

That wasn't the only surprise. Britain went on to beat the United States in a tight finish.

The 60,000-capacity stadium was primed for one last Bolt show, one last "To the World" pose after a victory, but the injury made it blatantly clear why Bolt is ready to retire. His body can no longer hold up.

"He is still the best in the world," said Justin Gatlin, Bolt's American rival who ended up with 100-meter gold and relay silver.

Bolt's teammates on the once-fabled Jamaican sprint squad were far from unmatchable, too. Bolt just had too much to make up in the final 100 meters as both Britain and the United States were ahead and even Japan was even.

As Bolt fell to the ground, the leg with the golden shoe giving way, the crowd still went wild because the home team went on to win gold in 37.47 seconds, .05 seconds ahead of the United States.

"It's a cramp in his left hamstring, but a lot of the pain is from disappointment from losing the race," Jamaican team doctor Kevin Jones said. "The last three weeks have been hard for him, you know. We hope for the best for him."

The race will certainly be remembered for the gut-wrenching way in which the sport's greatest athlete was forced to end his career.

It was yet another amazing upset in a championship of so many.

Before Bolt came onto the track, he was consoling Mo Farah, his long-distance equivalent who had just lost his first major race since 2011 when he failed to get gold in the 5,000 meters.

Farah also was bidding farewell to the track, coming up short of his fifth straight 5,000-10,000 double at major championships in a sprint against Muktar Edris Ethiopia.

Instead, Tori Bowie was the unlikely first double gold medalist at the championships, anchoring the U.S. team to the 4x100-meter relay title ahead of Britain and Jamaica.

At the same time, Allyson Felix, running the second leg on the winning team, earned a record 15th medal at the world championships in a career going back to 2005.

Bowie, who won the 100 meters this week, ran a strong anchor leg, leaving behind the opposition to finish in 41.82 seconds.

"Two gold medals is amazing for me," Bowie said. "We are on top of the world."

If Bolt and Farah were about farewells, the decathlon was about renewal in the wake of the retirement of two-time Olympic and world champion Ashton Eaton. And Kevin Mayer is the new "world's greatest athlete."

The Frenchman produced a dominant performance over two days and 10 events, ending with a celebratory 1,500 meters.

Mayer is the first Frenchman to win the title. He had only one scare during the two days of competition - when he scaled his opening mark of 5.10 meters in the pole vault on his third and last attempt.

Johannes Vetter of Germany won the javelin title with an opening throw of 89.89 meters. The German beat Jakub Vadlejch of the Czech Republic by 16 centimeters. Another Czech, Petr Frydrych, took bronze with a last throw of 88.32 meters.

In the high jump, Mariya Lasitskene of Russia cleared 2.03 meters to win ahead of Yulia Levchenko of Ukraine and Kamila Licwinko of Poland.

There was at least one veteran who did produce Saturday as Sally Pearson got another gold medal at the Olympic Stadium in London after missing much of the past two seasons because of injury.

Five years after winning the 100-meter hurdles at the London Games, Pearson won the world title in 12.59 seconds.

Dawn Harper-Nelson of the United States was second, .04 seconds behind, and Pamela Dutiewicz of Germany took bronze in 12.72.