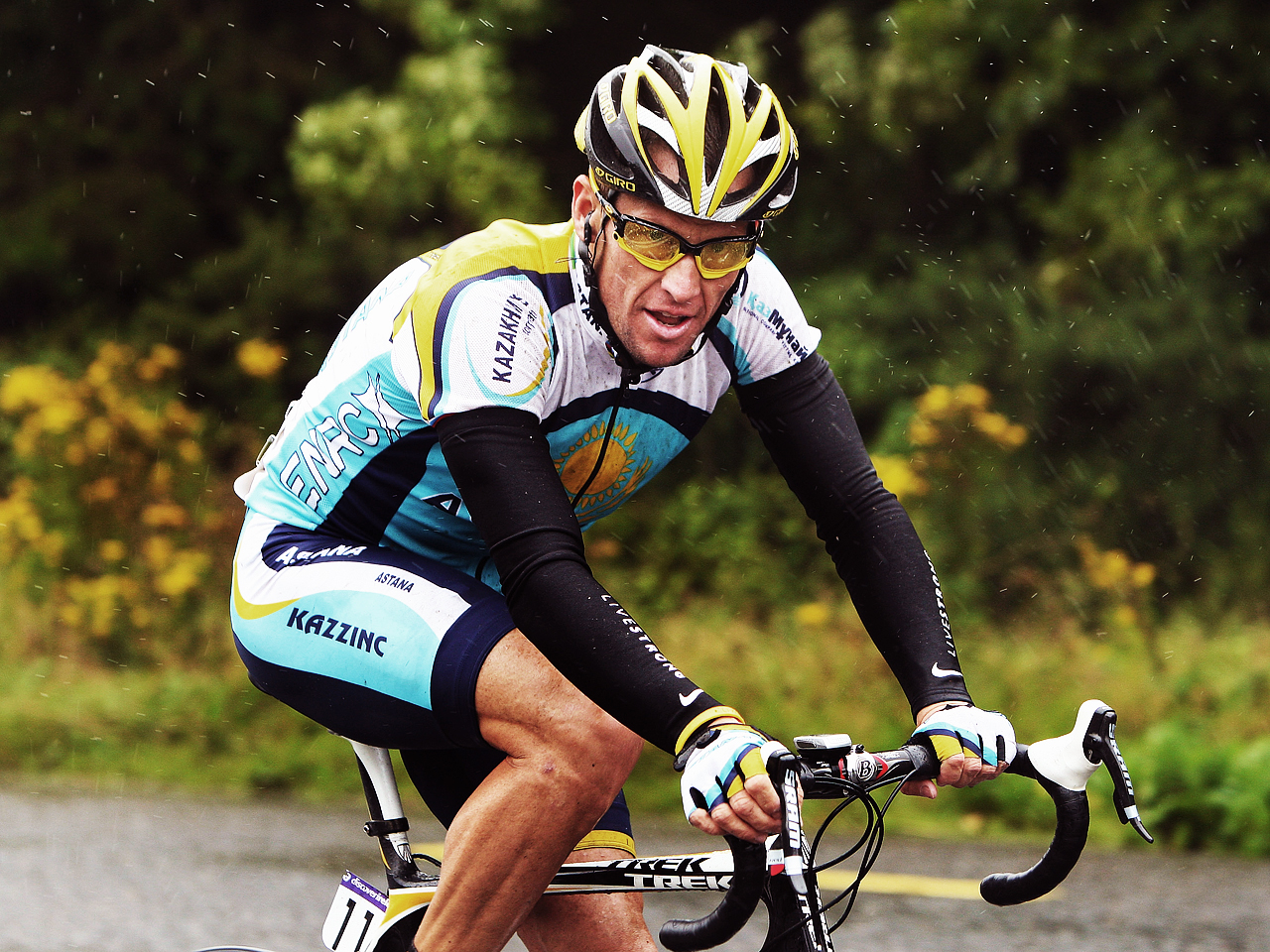 (CBS/AP) The U.S. Anti-Doping Agency said Thursday night it will strip Lance Armstrong of his unprecedented seven Tour de France titles after he declared he was finished fighting the drug charges that threaten his legacy as one of the greatest cyclists of all time.

Armstrong says USADA doesn't have the authority to vacate his Tour titles. However, Tygart told The Associated Press that USADA can do it.

Tygart called the Armstrong case a "heartbreaking" example of a win-at-all costs approach to sports.

On Friday, World Anti-Doping Agency head John Fahey told Reuters Armstrong should be stripped of his seven Tour titles, because his decision not to fight doping charges meant there was "substance" to the allegations.

Still to be heard from was the sport's governing body, the International Cycling Union, which had backed Armstrong's legal challenge to USADA's authority.

Armstrong, who retired last year, declined to enter arbitration -- his last option -- because he said he was weary of fighting accusations that have dogged him for years. He has consistently pointed to the hundreds of drug tests that he has passed as proof of his innocence.

"There comes a point in every man's life when he has to say, "Enough is enough." For me, that time is now," Armstrong said in a statement sent to The Associated Press. He called the USADA investigation an "unconstitutional witch hunt."

"I have been dealing with claims that I cheated and had an unfair advantage in winning my seven Tours since 1999," he said. "The toll this has taken on my family and my work for our foundation and on me leads me to where I am today -- finished with this nonsense."

USADA reacted quickly and treated Armstrong's decision as an admission of guilt, hanging the label of drug cheat on an athlete who was a hero to thousands for overcoming life-threatening testicular cancer and for his foundation's support for cancer research.

Tygart said the agency can strip the Tour titles, though Armstrong disputed that as he insisted his decision is not an admission of drug use, but a refusal to enter an arbitration process he believes is unfair.

USADA maintains that Armstrong has used banned substances as far back as 1996, including the blood-booster EPO and steroids as well as blood transfusions -- all to boost his performance.

Watch a "60 Minutes" interview from May with cyclist Tyler Hamilton, who said Lance Armstrong was using a banned drug called "EPO":

The 40-year-old Armstrong walked away from the sport in 2011 without being charged following a two-year federal criminal investigation into many of the same accusations he faces from USADA. The federal probe was closed in February, but USADA announced in June it had evidence Armstrong used banned substances and methods -- and encouraged their use by teammates. The agency also said it had blood tests from 2009 and 2010 that were "fully consistent" with blood doping.

Included in USADA's evidence were emails written by Armstrong's former U.S. Postal Service teammate Floyd Landis, who was stripped of his 2006 Tour de France title after a positive drug test. Landis' emails to a USA Cycling official detailed allegations of a complex doping program on the team.

USADA also said it had 10 former Armstrong teammates ready to testify against him. Other than suggesting they include Landis and Tyler Hamilton, both of whom have admitted to doping offenses, the agency has refused to say who they are or specifically what they would say.

Armstrong sued USADA in Austin, where he lives, in an attempt to block the case and was supported by the UCI, the sport's governing body. A judge threw out the case on Monday, siding with USADA despite questioning the agency's pursuit of Armstrong in his retirement.

"USADA's conduct raises serious questions about whether its real interest in charging Armstrong is to combat doping, or if it is acting according to less noble motives," such as politics or publicity, U.S. District Judge Sam Sparks wrote.

Now the ultra-competitive Armstrong has done something virtually unthinkable for him: He has quit before a fight is over.

"Today I turn the page. I will no longer address this issue, regardless of the circumstances. I will commit myself to the work I began before ever winning a single Tour de France title: serving people and families affected by cancer, especially those in underserved communities," Armstrong said.

Armstrong could have pressed his innocence in USADA's arbitration process, but the cyclist has said he believes most people have already made up their minds about whether he's a fraud or a persecuted hero.

It's a stunning move for an athlete who built his reputation on not only beating cancer, but forcing himself through grueling offseason workouts no one else could match, then crushing his rivals in the Alps and the Pyrenees.

Although he had already been crowned a world champion and won individual stages at the Tour de France, Armstrong was still relatively unknown in the U.S. until he won the epic race for the first time in 1999. It was the ultimate comeback tale: When diagnosed with cancer, doctors had given him less than a 50 percent chance of survival before surgery and brutal cycles of chemotherapy saved his life.

Armstrong's riveting victories, his work for cancer awareness and his gossip-page romances with rocker Sheryl Crow, fashion designer Tory Burch and actress Kate Hudson made him a figure who transcended sports.

His dominance of the Tour de France elevated the sport's popularity in America to unprecedented levels. His story and success helped sell millions of the "Livestrong" plastic yellow wrist bracelets, and enabled him to enlist lawmakers and global policymakers to promote cancer awareness and research. His Lance Armstrong Foundation has raised nearly $500 million since its founding in 1997.

Created in 2000, USADA is recognized by Congress as the official anti-doping agency for Olympic sports in the United States. Its investigators joined U.S. agents during the federal probe, and USADA chief executive Travis Tygart had dismissed Armstrong's lawsuit as an attempt at "concealing the truth." He said the agency is motivated by one goal -- exposing cheaters in sport.

Others close to Armstrong were caught up in the charges: Johan Bruyneel, the coach of Armstrong's teams, and three members of the medical staff and a consultant were also charged. Bruyneel is taking his case to arbitration, while two medical team staffers and consulting doctor Michele Ferrari didn't formally contest the charges and were issued lifetime ban by USADA. Ferrari later said he was innocent.

In a sport rife with cheaters, Armstrong has been under constant suspicion since the 1990s from those who refused to believe he was a clean rider winning cycling's premier event against a field of doped-up competition.

He had tense public disputes with USADA, the World Anti-Doping Agency, some former teammates and assistants and even Greg LeMond, the first American to win the Tour de France.

Through it all, Armstrong vigorously denied any and all hints, rumors and direct accusations he was cheating. He had the blazing personality, celebrity and personal wealth needed to fight back with legal and public relations battles to clear his name -- and he did, time after time.

Armstrong won his first Tour at a time when doping scandals had rocked the race. He was leading the race when a trace amount of a banned anti-inflammatory corticosteroid was found in his urine; cycling officials said he was authorized to use a small amount of a cream to treat saddle sores.

After Armstrong's second victory in 2000, French judicial officials investigated his Postal Service team for drug use. That investigation ended with no charges, but the allegations kept coming.

Armstrong was criticized for his relationship with Ferrari, who was banned by Italian authorities over doping charges in 2002. Former personal and team assistants accused Armstrong of having steroids in an apartment in Spain and disposing of syringes that were used for injections.

In 2004, a Dallas-based promotions company initially refused to pay him a $5 million bonus for winning his sixth Tour de France because it wanted to investigate allegations raised by media in Europe. Testimony in that case included former teammate Frankie Andreu and his wife, Betsy, saying Armstrong told doctors during his 1996 cancer treatments that he had taken a cornucopia of steroids and performance-enhancing drugs.

Armstrong fought every accusation with denials and, in some cases, lawsuits against the European media outlets that reported them.

But he showed signs that he was tiring of the never-ending questions. Armstrong retired (for the first time) in 2005 and almost immediately considered a comeback before deciding to stay on the sidelines, in part, because he didn't want to keep answering doping questions.

"I'm sick of this," Armstrong said in 2005. "Sitting here today, dealing with all this stuff again, knowing if I were to go back, there's no way I could get a fair shake -- on the roadside, in doping control, or the labs."

But three years later, Armstrong was 36 and itching to ride again. He came back to finish third in the 2009 Tour de France.

Armstrong raced in the Tour again in 2010, under the cloud of the federal criminal investigation. Early last year, he quit the sport for good, but made a brief return as a triathlete until the USADA investigation shut him down.

During his sworn testimony in the dispute over the $5 million bonus, Armstrong said he wouldn't take performance enhancing drugs because he had too much to lose.

"(The) faith of all the cancer survivors around the world. Everything I do off the bike would go away, too," Armstrong said then. "And don't think for a second I don't understand that. It's not about money for me. Everything. It's also about the faith that people have put in me over the years. So all of that would be erased."