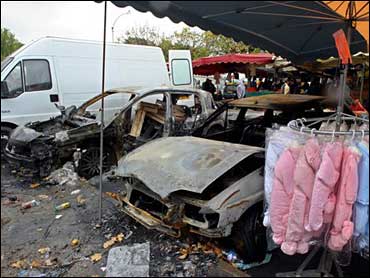 The American team that brought home the woman's world cup Saturday, was all over the place Sunday, having fun, getting applause, and possibly bringing in a new era in women's sports. CBS News' Jacqueline Adams reports.

"We had an excellent time with the Women's World Cup," said Briana Scurry, the team's goalie, addressing a mob of fans. "Thanks to all of you, you made it a dream come true for us."

The party was nationwide, wherever young girls flexed their muscles on a soccer field and parents and coaches roared their support.

"The World Cup and women's soccer is taking off. I think everybody that has even an interest in soccer should just take a ball and go out and play with it," said soccer tournament director Angie Thome.

Never has so much ridden on one woman's kick, but Brandi Chastain did not disappoint the 90,185 fans filling the Rose Bowl yesterday, the biggest crowd ever to see a women's game in any sport.

Michael Phelps: Everyone pees in the pool

Even President Clinton was there, and later, he thanked the team. Flying home, he told reporters the victory was a watershed for women athletes worldwide.

At least that's what team members hoped for when they spoke with CBS This Morning host, Mark McEwen.

"Throughout the entire tournament, you hear young girls saying, 'I'm going to be on the national team. I'm going to be out there someday,' said Mia Hamm, the team's biggest star. "And that makes us all feel incredibly good."

Saturday's success was a tribute to Title 9, the 26-year old legislation which forced schools to provide sports programs for girls as well as boys.

But now that women have proved they can both play the game and draw the crowds, the challenge remains finding sponsors ready to spend the bucks to field national teams.

"They're looking to see if there are investors out there, if there are sponsors, spectators, if the media will cover it," said Marla Messing, president of the Women's World Cup Organizing Committee.

Already, though, the sports drink Gatorade has sensed that women's sports is going places. Their new television ad features Mia Hamm, to the tune of "Anything You Can Do I Can Do Better," facing down sports and marketing icon Michael Jordan. What says more than that?