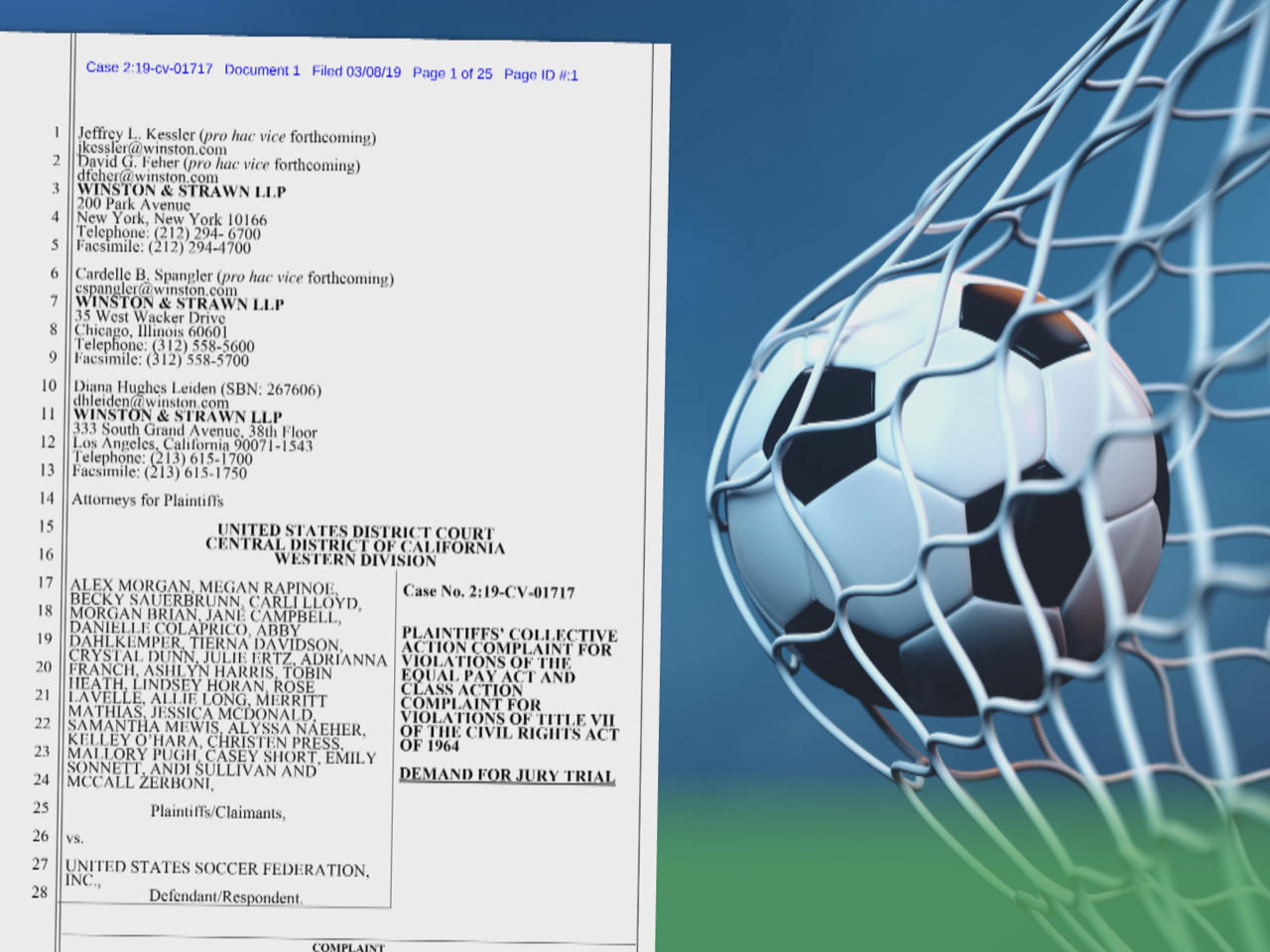 Players on the U.S. Women's National Soccer Team are ready for a battle – not on the field, but in court. They filed a lawsuit in California on Friday (International Women's Day) claiming the U.S. Soccer Federation is in violation of the 1964 Civil Rights Act.

In the suit, the players say the federation "has stubbornly refused to treat its female employees who are members of the women's national team equally to its male employees." The lawsuit is new, but the fight for equality on the field has been years in the making.

The U.S. Women's National Soccer Team is ranked number one in the world. They have three World Cup titles and four Olympic gold medals. Now, they say, it's past time they get paid like champions.

On Monday team member Alex Morgan and Megan Rapinoe spoke to "CBS This Morning" from France, where they are preparing to defend their world title.

"U.S. soccer is in a very unique position to take an incredibly bold stance," Rapinoe said, "I think we've learned a lot through this process. We've really come together as a group, and been able to solidify our unity and our strength, and really begun to understand the power of everyone being on the same page."

In the lawsuit, attorneys for the women point out that if both the men's and the women's teams were to win 20 non-tournament matches, the men would earn on average $263,320 – a little more than $13,000 per game, while the average women's team player would earn a maximum of $99,000, which equals a little less than $5,000 per game.

The U.S. Soccer Federation said in the past that part of the reason for the pay discrepancies is that the men bring in more revenue and TV ratings.

Co-host Norah O'Donnell asked, "Do you believe that the women's team has been undermarketed and that has had a huge effect?"

"Yes, I think there's no question," said Morgan. "That's one of the cases that we have in our fight, and that's a very important thing moving forward. And I don't think that's only us – I think that's women's sports all around."

Frustration on the U.S. Women's National Team has been building for years. Five players filed a complaint in 2016 with the Equal Employment Opportunity Commission alleging wage discrimination. Last month, the women received permission from the EEOC to sue.

"This is a social movement," said Christen Press. "This is about gender discrimination, and I don't think that positive change occurs in the world unless it has to."

O'Donnell asked, "Do you think you should be paid more than the men's team?"

"Yeah, absolutely," said Carli Lloyd. "We win. We're successful. [We] should get what we deserve."

The women's team has held the number one world ranking for 10 of the last 11 years. The men's team is currently ranked 25th.

The men's and women's teams are represented by two different unions, and their contracts were negotiated separately.

O'Donnell asked Morgan, "Do you believe that this fight goes beyond soccer?"

"Absolutely," she replied. "I mean, we're seeing so many woman in different areas of work, but also in soccer around the world women standing up for themselves."

The lawsuit makes good on a promise co-captain Carli Lloyd made more than two years ago: "This is history-making, what we're doing, what we're fighting for," she said. "It not only resonates with this team and with generations to come, but it's global as well."

O'Donnell asked, "Carli, you keep saying you're united. How far are you going to take this?"

"Until we get what we want," she replied.

In a statement, the U.S. Soccer Federation told CBS News: "U.S. Soccer and the U.S. Women's National Team reached a collective bargaining agreement two years ago. U.S. Soccer has faithfully and consistently worked with the U.S. Women's National Team players and staff to provide the team everything it needs to perform at the highest levels possible and compete to win world championships. The substantial and unwavering commitment by U.S. Soccer to those very ideals is evident in our proactive approach to drive the women's game forward, which includes the creation of two elite women's international tournaments to increase competition opportunities, adding additional technical and high-performance staff focused only on the USWNT, and enhancing our marketing campaigns. Our continued support and efforts toward enriching the women's game is every bit as certain today as it will be in the future."

The union that represents the men's team said in a statement it "fully supports the efforts of the U.S. Women's National Team players to achieve equal pay."