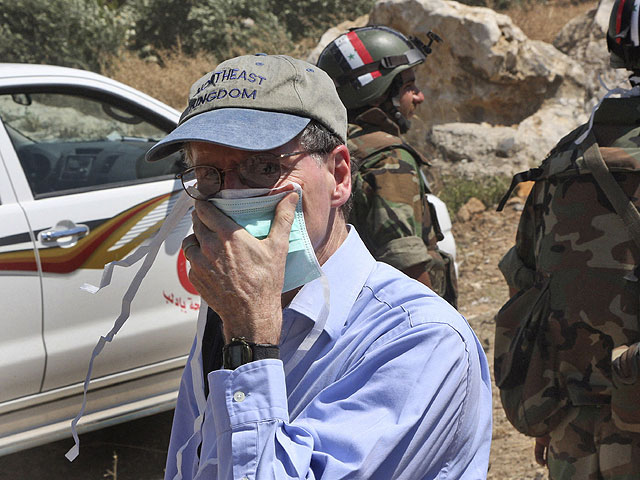 WASHINGTON - The United States pulled its ambassador out of Syria over security concerns, blaming President Bashar Assad's regime for the threats that made it no longer safe for him to remain.

Ambassador Robert Ford returned to Washington this weekend after the U.S. received "credible threats against his personal safety in Syria," State Department spokesman Mark Toner said Monday. Ford has been the subject of several incidents of intimidation by pro-government thugs, and enraged Syrian authorities with his forceful defense of peaceful protests and harsh critique of a government crackdown that has now claimed more than 3,000 lives.

"We hope that the Syrian regime will end its incitement campaign against Ambassador Ford," Toner said. "At this point, we can't say when he will return to Syria."

Toner said the U.S. embassy will remain open in Damascus and that the threats were specifically directed toward Ford. His return is conditional on a U.S. "assessment of Syrian regime-led incitement and the security situation on the ground," Toner said.

An American official said there were no plans to expel the Syrian ambassador in Washington in retaliation. The official spoke on condition of anonymity because of the sensitivity of the situation

Ford was the first American ambassador to Syria since 2005. President George W. Bush's administration withdrew a full-time ambassador from Syria over charges the country was involved in terrorism and the assassination of former Lebanese Prime Minister Rafik Hariri. Syria has denied any involvement.

The Obama administration decided to return an ambassador to Syria earlier this year in an effort to persuade Syria to change its policies regarding Israel, Lebanon, Iraq and support for extremist groups. Syria is designated a "state sponsor of terrorism" by the State Department.

Although Ford's appointment in January, while the Senate was out of session, was originally criticized by some Republicans in Congress, he has won praise within the administration and beyond for his determination to meet Syrian opposition leaders in a hostile environment, and tough criticism of the Assad regime's brutal military response to mass demonstrations.

Ford was greeted by demonstrators with roses and cheers when he traveled to the restive city of Hama in July, prompting immediate recriminations from the Syrian government, which tried to then limit where Ford could travel. Only days later hundreds of regime supporters attacked the U.S. Embassy in Damascus, smashing windows and spray-painting obscenities on the walls.

Ford also has been the subject of several incidents of intimidation by pro-government thugs, often in coordination with pro-Assad media capturing the humiliation. Media reports said Ford was hit last week with eggs and tomatoes while going to a mosque in Damascus. Other such incidents have occurred after meetings with dissident groups or individuals, and his postings on Facebook have provoked thousands of Syrian and other responses, and even some death threats from pro-Assad hardliners.

The U.S. last month decried Ford's treatment and "unwarranted and unjustifiable," after Assad supporters tried to force their way into a meeting he was having a prominent opposition figure. Syrian police were slow in responding, and Ford was trapped inside the building for about three hours. But White House press secretary James Carney insisted at the time that the U.S. had no plans to remove Ford for his safety.

At the time of Ford's arrival in Damascus, Syria was bouncing back from years of international isolation. Still, Assad largely shrugged off U.S. attempts to pull it away from its alliances with Iran, Hamas and Hezbollah. And as the Arab Spring protests escalated in Syria, Ford dropped his engagement efforts and took on an increasingly high-profile role defending the rights of Syrian protesters.

Toner lamented that the threats deprived the United States of a valuable emissary to the Syrian people at a time they face daily violence from Assad's security forces. Clashes on Sunday saw forces flood into villages where residents have been on strike and shoot two people dead, according to activists.

President Barack Obama has called on the U.N. Security Council to sanction Syria for using deadly violence against citizens who are rising up against the authoritarian government there.

A seasoned diplomat with extensive Middle East experience, Ford "has worked diligently to deliver our message and be our eyes on the ground" in Syria, Toner said. "This decision was based solely on the need to ensure his safety, a matter we take extremely seriously."