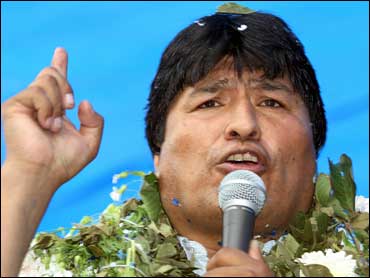 As a boy in Bolivia's bleak highlands, Evo Morales used to run behind buses to pick up the orange skins and banana peels passengers threw out the windows. Sometimes, he says, it was all he had to eat.

Now, holding the lead a week ahead of Bolivia's presidential election, he's threatening to be "a nightmare for the government of the United States."

It's not hard to see why. The 46-year-old candidate is a staunch leftist who counts Cuba's Fidel Castro and Venezuela's Hugo Chavez among his close friends. Moreover, he's a coca farmer, promising to reverse the U.S.-backed campaign to stamp out production of the leaf that is used to make cocaine.

With his Aymara Indian blood and a hatred for the free-market doctrines known to Latin Americans as neo-liberalism, Morales in power would not only shake up Bolivia's political elite, but strengthen the leftward tide rippling across South America.

"Something historic is happening in Bolivia," Morales told The Associated Press in an interview. "The most scorned, hated, humiliated sector now has the capacity to organize."

At a recent campaign stop in the western highland town of Caracollo, Morales and members of his Movement Toward Socialism party were mobbed by crowds who kissed them, showered them with confetti and draped necklaces of flowers and fruit around their necks.

"I have no fear in saying, and saying loudly, that we're not just anti-neo-liberal, we're anti-imperialist in our blood," he told the rally.

Morales, whose leather key chain sports a portrait of communist revolutionary Che Guevara, has already been involved in toppling two presidents, has come close to winning the presidency once before, and is now running strong against conservative former President Jorge Quiroga and several other candidates. If no one wins an outright majority next Sunday, Congress will choose between the top two vote-getters in mid-January.

"Symbolically, he would represent a fundamental change," said Jimena Costa, a political science professor at Bolivia's Universidad Mayor de San Andres. "It's not just the first time an Indian would win the presidential elections, but he would be doing it with the support of a sector of the white and mestizo community and urban populations."

Morales has been a problem for Washington since he rose to prominence in the 1990s as the leader of the cocaleros, or coca farmers, in Bolivia's tropical Chapare region, leading their often violent resistance to U.S.-backed coca eradication efforts.

While the U.S. government insists that much of the Chapare's coca becomes cocaine, farmers say they supply a legal market. Coca leaves are sold in supermarkets and can be chewed, brewed for tea, and used in religious ceremonies.

During the last presidential election, then-U.S. Ambassador Manuel Rocha criticized Morales, only to see him shoot up in the polls. This time Washington has kept silent, though a statement two weeks ago by the present ambassador, David Greenlee, urging Bolivia not to change course on coca, was widely interpreted as a jab at Morales.

"I hope there aren't changes, because if there are changes for the worse, the country that's going to suffer is Bolivia," Greenlee told an anti-drug rally in El Alto, a slum city next to La Paz.

Morales, more comfortable in black Wrangler jeans and sneakers than suit and tie, still maintains coca fields and pledges an international campaign to legalize the leaf and industrialize its production. He insists he will fight drug trafficking, but maintains that the plant has been wrongly maligned in the world's mind.

As a boy, Morales' family struggled to survive. Of seven children, Evo was among only three who made it past infancy. He helped herd the family's llamas and harvest their potatoes, played trumpet in a traveling band and dropped out of high school. When he was 19 the family joined the highland migration to low-lying Chapare in the southeast. There he became a cocalero and in 1993 was elected president of the local coca farmers' federation.

Meanwhile, the nation of 8.5 million was emerging from decades of coups and dictatorships and joining the spread of democracy across the continent. Morales founded the Movement Toward Socialism in 1995, was later elected to congress, and in 2002 narrowly lost the presidential race to Gonzalo Sanchez de Lozada.

The free market policies that have failed to pull Bolivians out of poverty, coupled with the conflict over how best to exploit the continent's second largest natural gas reserves, has empowered the country's poor Indians to demand change. Morales became an important figure in waves of protest that brought down Sanchez de Lozada in 2003 and his successor, Carlos Mesa, in June.